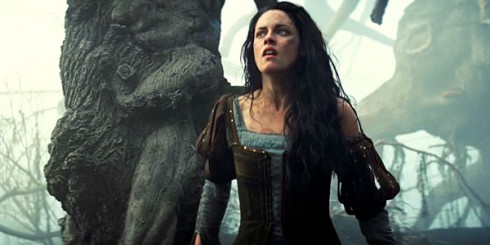 Kristen Stewart fans, brace yourselves! Opening June 1, 2012, there’s a while to wait to see the final product, but Universal has released a trailer for the still-filming Snow White and the Huntsman.

This teaser features Charlize Theron’s British-like accent as the Evil Queen, and has lots of fun horsey battle scenes, and kick-ass action shots of Kristen and Chris Hemsworth. We also get to watch Charlize suck the beauty out of some innocent maiden, which she tries to tell us in narration that she used to have a conscience, but now she’s a total sadist.

Even though the trailer’s out first, Huntsman will be beat in the theaters by Relativity’s newly titled Mirror Mirror starring Lily Collins and Julia Roberts, which is set to release March 16, 2012. How many Snow Whites can we possibly handle in 2012? Will you be watching both, or just one, or neither?