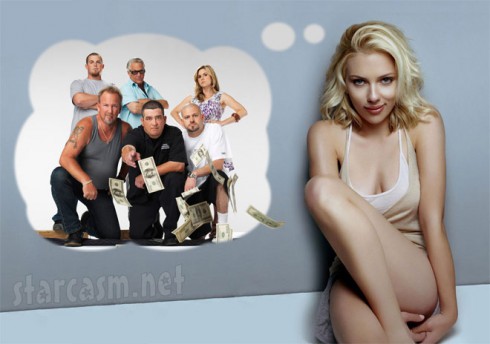 Scarlett Johansson was on The Tonight Show with Jay Leno Wednesday night to promote her new film The Avengers, but before she got to the Marvel super-hero blockbuster (which is setting all sorts of opening weekend records btw), Scarlett talked a bit with Jay about her television viewing habits.

“As I remember, you like bizarre television,” Jay says. “You fixate on shows,” he adds.

“Well yeah, there are certain shows that I do like,” Scarlett replies. “Now I’m more into Storage Wars, which I just love that show.” [The audience erupts with thunderous applause]

Yuuuuuuup! ScarJo is a Storage Wars fan! I don’t know about you, but I think I’m going to start referring to Scarlett as “The Wow Factor.” (She’s a 300 million dollar bill alllllll day long!)

“What is it about it that you like?” Jay asks.

To which Scarlett replies, “I don’t know, it’s just like people sorting through garbage.”

Here’s the clip. The SW conversation starts right around the 2:45 mark – just after Scarlett confesses she was obsessed with the trailer for The Human Centipede for a while.

Scarlett Johansson: Oh my god, I saw this show that just looked so crazy, where it’s the baggage claim thing. You know how in the beginning of Storage Wars they’re like, ‘When a storage unit is not claimed, these five people basically come and buy your crap’ or whatever. But this one is a baggage claim thing, that I guess if your baggage is not claimed, people … auction off your bags?

Scarlett: That is crazy!

Jay: Well, what are you going to do with them? No one ever claimed them. It’s ‘unclaimed’ baggage.

Jay: So you think you’re watching to see if your bag comes up, is that what it is?

Scarlett: [laughs] No, yeah, that’s right – can you believe it? It’s like you watch and all of a sudden you realize it’s something that you lost seven years ago. But nobody does not want to get their baggage. I’m pretty sure if they packed it they want it back.

Jay: But sometimes people disappear or they – who knows?

Jay: See, that’s the mystery! You don’t know what happened! They met a guy on Craigslist and were never heard from again. That’s what happens.

There is no date set for Luggage Wars (and very little information available about it aside from the press release from back in November.) The same cannot be said for the third season of Storage Wars, which premieres in June! (A&E is also expanding the Storage Wars franchise to the east coast with Storage Wars New York City and Storage Wars Miami!) Here is the fun preview trailer for Storage Wars Season 3: