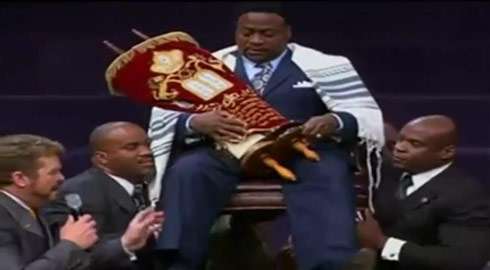 Bishop Eddie Long of Atlanta area mega-church Birth Missionary Baptist Church was in the headlines a while back for all the wrong reasons. He was accused of bribing and sexually coercing five young men under his tutelage and later reportedly settled out of court for 24.8 million dollars and a private apology.

Long managed to make it through this ordeal and maintained his leadership of the huge congregation. He’s been out of the national public eye for the most part but a recent video circulating has him out front and center once again. And this time it’s “king” Eddie Long.

Ralph Messer, a visiting speaker, worked the crowd into a frenzy during last weekend’s service. As his pitch raised and excitement grew he said of Long:

“He’s a king. God’s blessed him. He’s a humble man. But in him is kingship. In him is royalty. In him was a land of Israel. In him was a k chromosome. He was brought through the slaves, raised up in a city, and God now wants to release a new anointing.”

Long was then wrapped up in scrolls and hoisted in the air while remaining in his chair by four men as the congregation went wild. He was paraded around the stage as Messner labeled him a king.

In a piece by Rev. Wil Gaffney, Ph.D. for The Huffington Post there is a 27 point list discrediting Messer. In part it stated:

“He does not, however, represent recognizable Jewish thought or practice in his (mis-) representations of the Torah and other Jewish sancta — or for that matter, New Testament and Christian biblical interpretation and theology.”

What is your opinion of this latest bit of Bishop Eddie Long viralness? 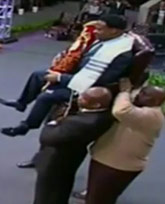