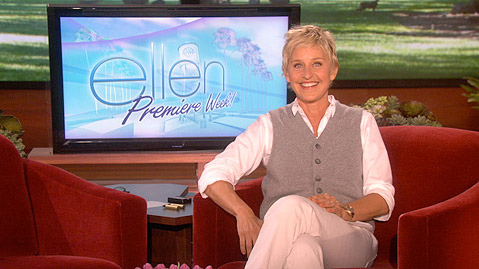 Ellen DeGeneres will replace Paula Abdul as the fourth judge on American Idol!

Holy Crap! According to an official announcement from Fox, talk show host and lovable lesbian Ellen DeGeneres will be replacing Paula Abdul as the fourth judge on American Idol! This is an absolute out-of-the-ballpark homerun for Fox! Not only did they select a judge that will be able to draw in viewers that weren’t fans of the show before, but they instantly silenced any and all boo-hooing stemming from the departure of AI staple Paula Abdul.

Here’s video of the announcement from Ellen herself:

Foreshadowing the announcement was Simon Cowell’s appearance on Ellen a few months ago. Simon says he believes all four judges will be back next season, to which Ellen responds, “Oh…really?”

Here’s the press release issued by Fox and American Idol with responses from the show’s producer, the network and Ellen herself:

Emmy Award-winning talk show host Ellen DeGeneres has joined American Idol as a fourth judge. DeGeneres will sit alongside Simon Cowell, Randy Jackson and Kara DioGuardi and offer her own unique perspective to the contestants throughout the competition.

“I’m thrilled to be the new judge on American Idol,” said DeGeneres. ”I’ve watched since the beginning, and I’ve always been a huge fan. So getting this job is a dream come true, and think of all the money I’ll save from not having to text in my vote.”

“I could not be more excited to have Ellen join the American Idol family,” said creator and executive producer Simon Fuller. “Ellen has been a fan of the show for many years, and her love of music and understanding of the American public will bring a unique human touch to our judging panel. I can’t wait for this next season to begin.”

“We’re all delighted to have Ellen join our ninth season of American Idol,” said executive producer Cecile Frot-Coutaz. “Beyond her incredible sense of humor and love of music, she brings with her an immense warmth and compassion that is almost palpable. She is one of America’s foremost entertainers, and we cannot wait to have her join our team.”

Mike Darnell, President of Alternative Entertainment for FOX added, “We are thrilled to have Ellen DeGeneres join the American Idol judges’ table this season. She is truly one of America’s funniest people and a fantastic performer who understands what it’s like to stand up in front of audiences and entertain them every day. We feel that her vast entertainment experience – combined with her quick wit and passion for music – will add a fresh new energy to the show.”

A beloved television icon and entertainment pioneer, DeGeneres’ distinctive comic voice has resonated with audiences from her first stand-up comedy appearances through her work today on television, in film and in the literary world. DeGeneres has made a home for herself in the daytime arena with her hit syndicated talk show, “The Ellen DeGeneres Show.” The show, now entering its seventh season, won the Daytime Emmy for Outstanding Talk Show Host four years in a row and has earned a total of 29 Daytime Emmy Awards.

DeGeneres was recently included in Forbes’ Top 5 “Most Influential Women in Media” and was voted “Best Daytime Talk-Show Host” by Parade.com readers. In addition, DeGeneres has been voted “Favorite TV Personality” by The Harris Poll’s annual favorite television star list beating out Oprah Winfrey and Jay Leno. DeGeneres was included in MSNBC’s “Power players who shape your TV habits.” DeGeneres also was honored with Television Week’s Syndication Personality of the Year and voted No. 1 in Oxygen’s “50 Funniest Women Alive” special in the company of such comedic legends as Carol Burnett and Lily Tomlin and has been included in TIME’s 100 Most Influential People.

DeGeneres had the honor of hosting the highly rated 79th Annual Academy Awards and was nominated for a Primetime Emmy Award for Outstanding Individual Performance In A Variety or Music Program. This follows her 2005 stint hosting the Primetime Emmy Awards, which marked her third time hosting the show. Her performance hosting the 2001 award show garnered her rave reviews for providing a perfect balance of wit with heartfelt emotion to the post-September 11 telecast audience. DeGeneres won an American Comedy Award for her inaugural effort hosting the show in 1994. Additionally, DeGeneres co-hosted American Idol’s very successful “Idol Gives Back” special that raised money for children in extreme poverty in America and Africa.

In 2008, DeGeneres became the newest face for CoverGirl. The national print and commercial campaign for Simply Ageless Foundation premiered in December and the product quickly became No. 1 in the marketplace, outperforming expectations. DeGeneres partnered up with American Express in 2005 where she appeared in their ad campaign “My Life, My Card,” including a national commercial and a print campaign. DeGeneres later appeared in the national commercial “My Life Goal: to work with animals” which won a Primetime Emmy Award.

Prior to the launch of her talk show, DeGeneres scored simultaneous achievements on stage, film and in the literary world. She enjoyed unprecedented popular and critical response to her character, Dory, the fish with extreme short term memory, in the blockbuster animated feature film, “Finding Nemo.” At the same time, DeGeneres crossed the country on a 35-city stand-up comedy tour, entitled the “Here and Now” tour. Her stop at the famed Beacon Theater in New York was turned into an HBO special and was subsequently nominated for two Emmys. Finally, in October, Simon & Schuster published DeGeneres’ second book, “The Funny Thing Is….,” comprised of the author’s comedic short stories and essays. The book hit the New York Times’ Bestseller list upon its release. In 2005, DeGeneres was nominated for a Grammy Award for Best Comedy Album for the audio version of the book. Her first book, “My Point…And I Do Have One,” published in 1995, debuted at No. 1 on the The New York Times bestseller list.

DeGeneres’ career began as an emcee at a local comedy club in her hometown of New Orleans, which led to national recognition in 1982 when her videotaped club performances won Showtime’s “Funniest Person In America” honor. When DeGeneres moved to Los Angeles she filmed her first HBO Special, “Young Comedians Reunion,” then in 1986 “Women of the Night.” That same year, DeGeneres scored a first by becoming the first female comedian to be summoned by Johnny Carson to sit down with him after her performance. In 1989, DeGeneres received a Cable Ace nomination for her “Command Performance: One Night Stand” special. She was also named “Best Female Stand-Up” at the 1991 American Comedy Awards.

DeGeneres began her acting career in television on the FOX sitcom “Open House.” She moved on to ABC’s “Laurie Hill,” prior to being offered a part on “These Friends of Mine” by ABC. After the first season, the show was renamed “Ellen.” Running from 1994 to 1998, the show garnered record ratings, with DeGeneres receiving Emmy nominations each season in the Best Actress category. In 1997, DeGeneres was the recipient of the coveted Peabody Award as well as earning an Emmy for writing the critically acclaimed “Puppy Episode” when her character came out as a gay woman to a record 46 million viewers.

Both on and off screen, DeGeneres’ humanitarian efforts take center stage. DeGeneres is passionate about bringing awareness to the people of New Orleans, her hometown, which was devastated by Hurricane Katrina and her efforts have resulted in “The Ellen DeGeneres Show” raising over $10 million to improve the lives of New Orleans residents. Overall, “The Ellen DeGeneres Show” has raised over $50 million and brought attention to various causes, including global warming and animals. Additionally, DeGeneres continues to raise awareness about breast cancer, and served as spokesperson for General Mills’ breast cancer awareness initiative, Pink for the Cure, and hosted special episodes of her show to mark Breast Cancer Awareness Month.

Since she was first nationally recognized in 1982 as a comedian in New Orleans, Ellen’s many contributions to the entertainment industry have earned her numerous accolades including a Golden Apple Award as Female Discovery of the Year from the Hollywood Women’s Press Club; a Lucy Award honoring women in Television and Film, as well as an Amnesty International Award.

Visit americanidol.com for exclusive videos, interviews and photos of the finalists, as well as special behind-the-scenes information and all of your American Idol news.

American Idol is coming back to TV! Will Ryan Seacrest host?

PHOTOS Your daily Pia Toscano: Out and about in NYC