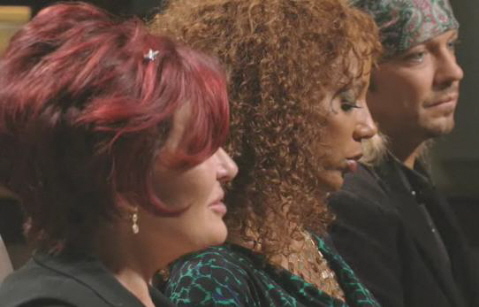 It looks like nothing can stop ’80s hair band rock icon Bret Michaels from ruling reality TV.  In a pre-taped episode of Celebrity Apprentice Sharon Osbourne was sent home in an emotional “you’re fired” Donald Trump scene leaving  Michaels and Holly Robinson Peete as the final two competing for the top prize.

Michaels and Peete will be competing for a $250,000 grand prize, which will go to their selected charities.  The final challenge is for Bret and Holly to create a new flavor of Snapple.  As has been widely reported, Michaels is recovering from a near fatal subarachnoid brain hemorrhage that he suffered on April 22nd.

Here is the clip of Sharon’s elimination:

It should be an interesting finale but I feel kind of bad for Holly Robinson Peete as it looks like most people are going to be rooting for Bret Michaels to pull off the rare “pre-taped reality competition victory while rehabilitating from a near-fatal medical condition” trick.  I think that’s more rare than a perfect game in baseball but I’ll have to check with my stat guys.

The final epsiode of Celebrity Apprentice will air on Sunday at 9 PM EST.

PHOTO Naked Bret Michaels on the cover of Billboard magazine