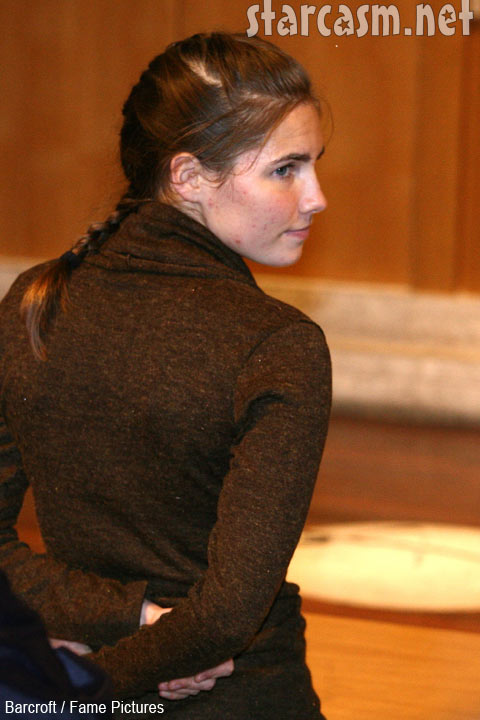 A verdict is expected at 6p.m. today in the Meredith Kercher murder trial 2 years after the slaying. Meredith Kercher, a British student studying in Italy was found dead in November 2007 in the apartment she was sharing with roommate Amanda Knox, an American student (pictured above). Kercher’s throat was slashed, but the slayer failed to hit the main artery, meaning that she suffered a slow, painful death.

Amanda Knox and her Italian boyfriend Raffaele Sollecito were arrested and held in the case soon after Kercher’s death. In the Italian court, prosecutors painted a picture of Amanda Knox as a Promiscuous girl who, with boyfriend Raffaele Sollecito and Congolese immigrant Patrick Diya Lumumba, tried to engaged Kercher in “extreme sex games.” When Kercher refused, they prosecution alleges that Sollecito had sex with her at knife point and then someone slit her throat. (source Telegraph)

Amanda Know made her last statement yesterday to Italian courts, saying she fears the “assassin’s mask” forced upon her by the prosecution:

“They say that I am calm. I am not calm. I fear to lose myself, to have the mask of the assassin forced upon me. I fear to be defined as someone I am not. After years of prison, I confess that I feel sad and frustrated. In front of you, I feel vulnerable, but I am confident of what I know. My lawyers, my family and my friends save my life every day. I also thank the prosecutor because they are doing their work, even though they do not understand, and because they are trying to bring justice to a person who was taken from this world.”

Amanda Knox and Raffaele Sollecito have DNA evidence against them, but it is also likely that the crime scene has been contaminated. Amanda Knox has changed her story, but her original story was thrown out of the trial because she did not have a lawyer present at the time. View evidence from the trial here.

Why Belle Knox named herself after Amanda Knox