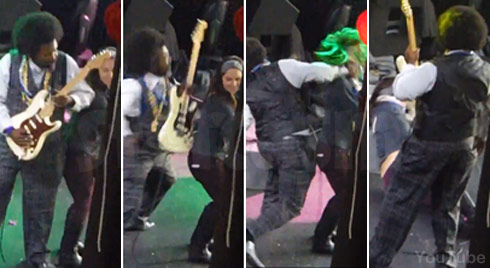 Afroman, best known for his hit “Because I Got High,” got arrested in Biloxi, Mississippi Tuesday for completely clobbering the bejesus out of a female fan who got up on stage and attempted to grind on the musician during a guitar solo.

According to folks on the scene he continued to perform after the woman’s smashed head hit a raised part of the stage hard.

The music stopped shortly thereafter and security took the woman off stage while police took Afroman outside of the venue and handcuffed him.

A rep for the rapper told Billboard, “This was a completely involuntary reflex reaction to people infringing on his stage space. It was uncharacteristic behavior that was initiated by outside uncontrolled forces.”

Here’s the video of this woman getting KTFO. Some of y’all might find this a little too violent (seriously):

Afroman wasn’t acting in self defense. At least I don’t think so. There were 2 girls on stage and he told them to get off and one did. The other girl started shaking her booty on him and he very clearly knew 1. It was a girl and 2. She wasn’t causing him any harm. I also have a second video of afterwards, some guy goes up there and Afroman takes off the guitar and raises it like he’s about to hit the guy with it. People threw drinks at him and boo’d him.

Do you think Afroman had the right to lay this fan out?