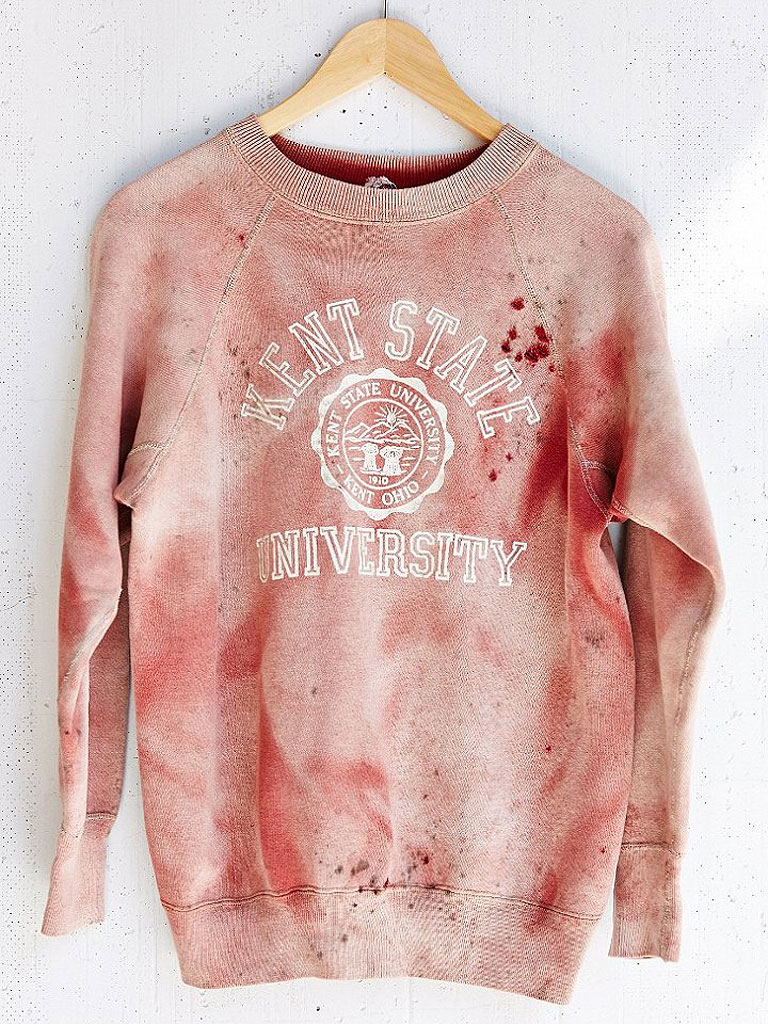 On May 4, 1970, four unarmed Kent State University students were shot dead and nine others were injured by members of the Ohio National Guard during a Vietnam War protest. Clothing retailer Urban Outfitters thought it would be a good idea to sell a “vintage” one-of-a-kind sweatshirt that appeared to be covered in blood stains and featuring the University’s seal. This was, of course, not a good idea at all.

Buzzfeed caught wind of the item, which had a listing price of $130, and when they shared the sweatshirt image complaints started rolling in via social media. The item quickly sold via the retailer’s website and then went on the secondary market via eBay at a whopping sell price of $550.

Urban Outfitters has had a history of these kind of poor decisions including pill bottle-shaped alcohol paraphernalia and an “eat less” t-shirt among others.

The company released a statement via Twitter apologizing for any confusion – explaining that the sweatshirt was not intended to allude to the Kent State shootings:

Urban Outfitters sincerely apologizes for any offense our Vintage Kent State Sweatshirt may have caused. It was never our intention to allude to the tragic events that took place at Kent State in 1970 and we are extremely saddened that this item was perceived as such. The one-of-a-kind item was purchased as part of our sun-faded vintage collection. There is no blood on this shirt nor has this item been altered in any way. The red stains are discoloration from the original shade of the shirt and the holes are from natural wear and fray. Again, we deeply regret that this item was perceived negatively and we have removed it immediately from our website to avoid further upset.

Are you buying Urban Outfitters’ take that the appearance of blood was coincidental (BTW – no one bought the sweatshirt via the eBay auction)?