The L.A. Times is reporting that a hooded man in gloves broke into the Hollywood Hills home of Paris Hilton and ransacked her bedroom, getting away with an estimated $2 million worth of jewelry and who knows what else. (Designer chi-hua-hua clothes and night vision video cameras?) LAPD Officer April Harding says a forced entry was reported by a security guard at 5 a.m. Paris was not at home during the time of the incident, and though her whereabouts at 5 a.m. aren’t known at this time, she was seen out the night before at various locations, including a Clockwork Orange-themed birthday bash for Christina Aguilera.

The real story here isn’t the break in, it’s the public health concern stemming from a guy in just a hooded sweatshirt and gloves rifling through the bedroom of Paris Hilton! That sounds like the opening scene to a 28 Days Later sequel! 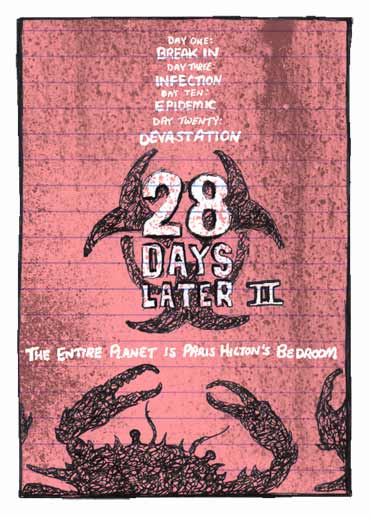 (Heh heh! I went all Photoshoppy on that one! I apologize for the color.)

If you’re bored, in need of money and not worried about exposure to uber-cooties, then plan your own Parisian heist by checking out this tour of P Hilt’s house with Ellen DeGeneres. (I don’t know much about expensive fashion, but if Sex and the City is accurate, there is easily $200 million in that shoe “closet” alone!) Make sure you make your attempt between 6 p.m. and 8 a.m. while she’s is “out on the town,” the last thing in the world you want to do is bump into or on Paris!