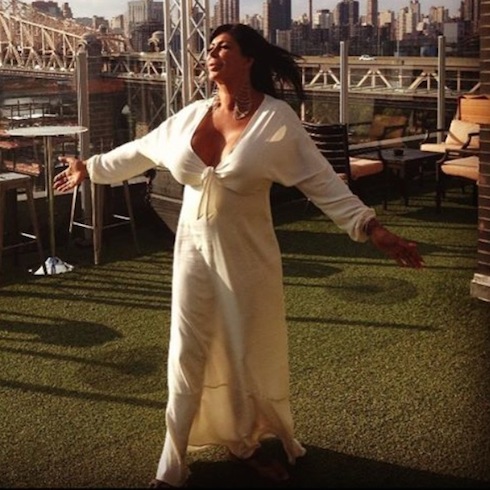 Tribute after Big Ang tribute has begun pouring in from all over the world in the wake of the Mob Wives star’s passing.

Sister Janine Detore was the first member of the family to offer a Big Ang tribute, doing so with a series of private, heartwarming photos on Instagram:

At 3:01 my beautiful sister got her wings she’s with our mom & dad. We would like to thank everyone for your prayers and support … ??? #myfriend #mysister till we meet again my love @bigangvh1

Janine then revealed she had gotten a series of tattoos on her hands, as a further Big Ang tribute:

For you #mysister #myfriend @biggangvh1 forever with me #imissyou #myhearthurts who will be here when I’m sick when I have secrets when I have my first grandchild who will I tell now all our talks our memories this isn’t fair I looked up to you from when I was little your were my first friend how am I going to do this #momholdher A photo posted by janinedetore (@janinedetore) on Feb 18, 2016 at 9:29pm PST

Thank you, Ang, for everything. ❤️ #RIPBigAnghttps://t.co/1Z3Tltkl5e

Friendship is not about who you have known the longest. It’s about who came and never left your side @dritadavanzo pic.twitter.com/WbVANbknaz — DritasMob (@DRITASmob) February 19, 2016

So many memories ?RIP Ang ?? and I Truly want to thank everyone for all the love prayers &… https://t.co/8oo8jRXOTV

Our #Mobwive days will never be the same without Ang . She will always be a part of the #OG‘s… https://t.co/fTjbLXgGgz

Good morning i just want to thank you for all your condolences, kind words & well wishes .. I appreciate each & everyone of you .. God Bless

Prayers for @biggangvh1 & her family … She’s many things to many people but right now with all… https://t.co/AUtPezyQyc

Look what @demontpinder made..beautiful this is of Angela aka Big Ang. This is for her family, friends and her fans. pic.twitter.com/PioMiXVkcE

Heaven just gained another angel. (For all those who feel I didn’t mention Angela last night, I… https://t.co/XzH6GnLPXR

Scarpaci’s Funeral Home in Brooklyn is holding Big Ang’s wake this weekend, and has opened up an online memory book for fans to share their thoughts and offer condolences. If you’d like to leave a Big Ang tribute for her family to read, you can do so by clicking here.

If you’re in the New York area and want to try and visit Big Ang’s family during her wake, Scarpaci’s is holding four visitations today and tomorrow. Here’s a list of when those will be held. Big Ang’s funeral will be on Monday morning at the Basilica of Regina Pacis in Brooklyn, after which she will be buried at Resurrection Cemetery on Staten Island.

How did Casey Johnson die? Diabetes and/or prescription drugs may have played a role