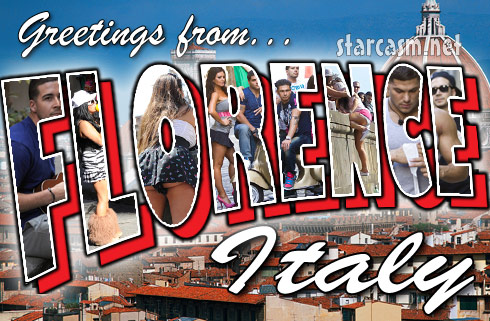 As residents of Florence, Italy survey the damage left in the wake of Jersey Shore Season 4 I thought I might put together a small virtual scrapbook of some of the cast’s most memorable moments caught on camera.

Though they were only “in country” for five weeks, Snooki, The Situation, Pauly D, JWoww, Sammi Sweetheart, Ronnie, Vinny and Deena had a slew of Kodak moments that if nothing else made the jobs of bloggers like me just that much easier! From bullhorning gypsies to chef-hatted scooter rides the JS crew were a wellspring of remarkable images and stories that inspired shock or laughter (or both) on a daily basis.

Anyways, here are the best of the best counting down from ten to one with links to the original posts if applicable (Just click the pics). Enjoy the photos – I hope they are able to entertain you for a while as we all wait for the season premiere on August 4! 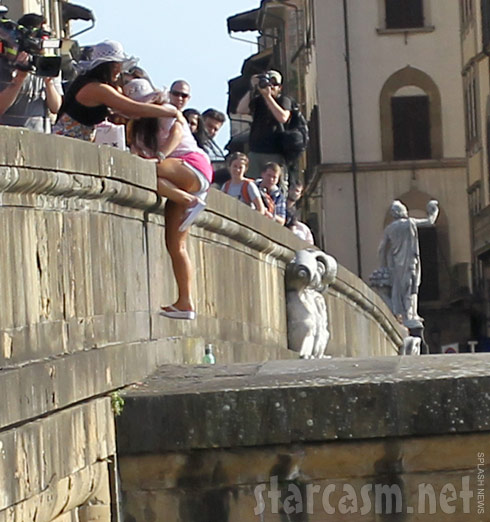 This image reportedly made the front page of numerous Italian newspapers and features Deena Cortese dangling over the edge of one of Florence’s many old bridges. It happened very early in their sojourn in Italy and really helped set the mood for the rest of their time there. (It appears as though her life may have been in danger, but Deena was actually just being helped up from a concrete surface a few feet below. Photo: Prahl/St.Clair/Mac Splash News)

***This wasn’t the only controversial shot of Deena hanging over a bridge though. Here she is in another photo that could be titled “Hanging Out” showing off her Ponte Crackio for all to see: 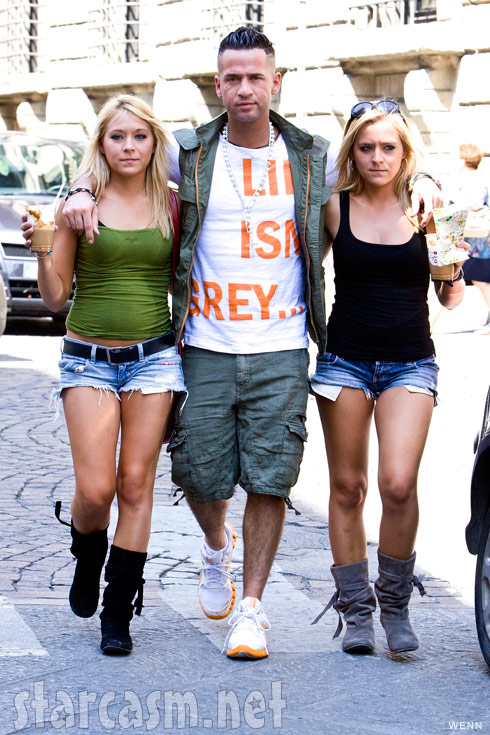 Some questioned whether the Guido charms of the Jersey Shore guys would go over well in Florence, but the guys seemed to have no problems at all with the ladies! The Situation had so much luck he was forced to deal with them two at a time. In this photo he is seen with the Taltos twins, blond students from the University of Florida who were studying abroad in Florence. (Why study abroad when you can study two broads, right?) 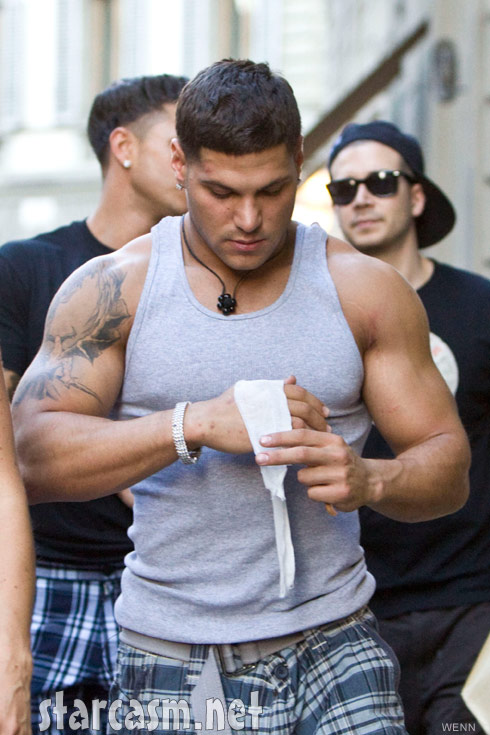 It wouldn’t be a season of Jersey Shore without somebody getting punched and this year’s consumer of the knuckle sandwich was The Situation, who reportedly got fist pumped by Ronnie Ortiz-Magro after the two had an argument in a nightclub. As you can see in the above photo of Ronnie, The Situation fought valiantly and managed to scrape up Ronnie’s knuckles by using his face. (He made Ronnie angry, and trust me – you wouldn’t like him when he’s angry!) 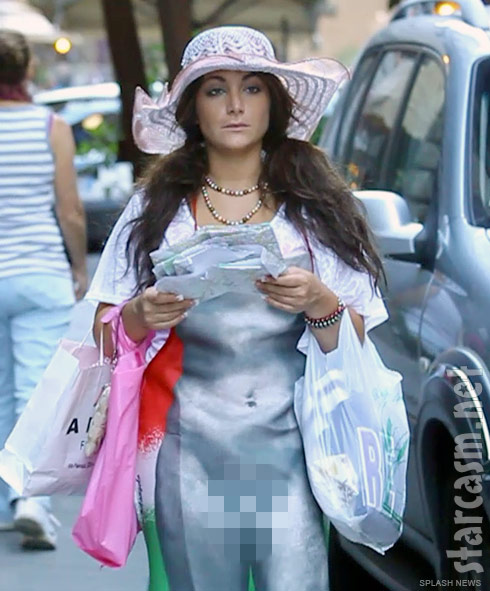 Deena Corteses demonstrated that she has a pair of marble balls as she donned a novelty apron with an image of Michelangelo’s nude statue of David on the front and strutted the streets of Florence showing off her own set of Situation abs (and more). It was all fun and games until Snooki mistakenly asked her out. (JK) (Click the photo for the original post and you can view the uncensored picture there. Photo: Prahl/Macca/Sinky Splash News) 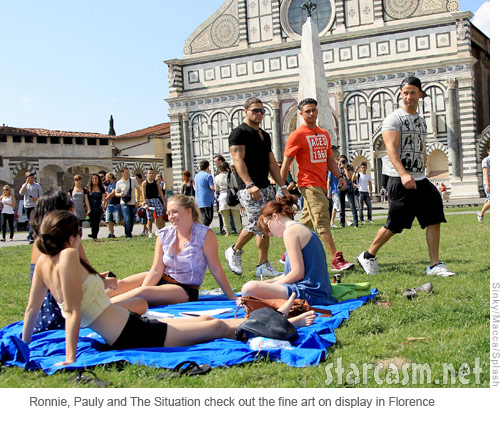 6. Sightseeing With The Boys

Ronnie, Pauly D and The Situation took in the sights as they walked around Florence. (“So Ronnie, how did you like Florence?” “Oh man, she was hot!” “No, I mean the city.” “What?”) 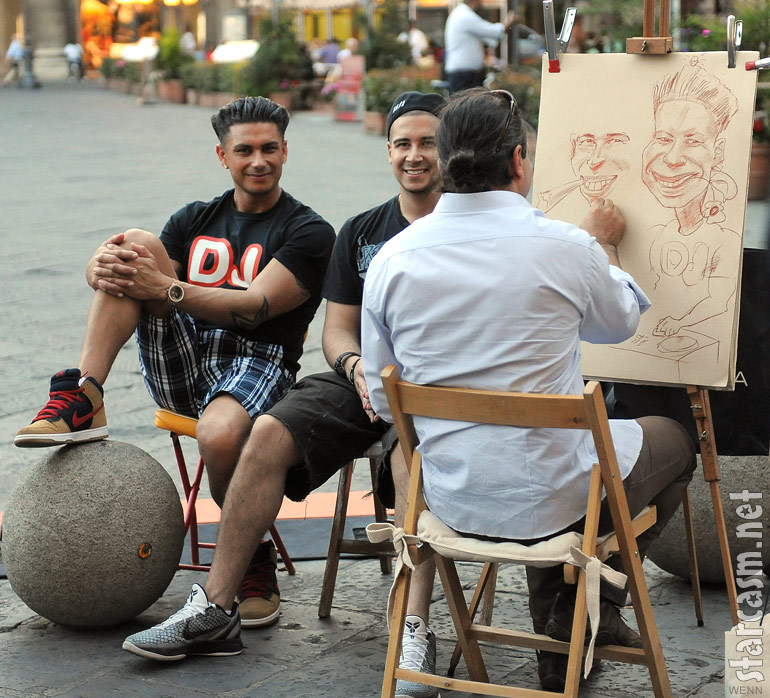 A street artist was presented with the seemingly paradoxical task of drawing caricatures of Pauly D and Vinny Guadignino, two of the biggest caricatures in reality television! In the end the Florentine artist honored his esteemed predecessors with some over-the-top sketches that somehow managed to exaggerate Pauly and Vinny more than reality! (I love Pauly’s little turntable.) 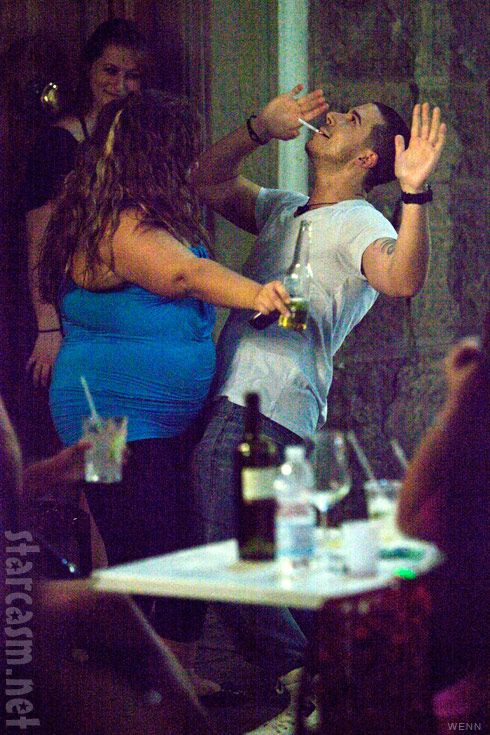 Surprisingly this is the only Vinny Guadagnino photo to make the list from his infamous Hangover III party night that included dancing with the party gal you see above (It seems there is a certain five-letter word in the Jersey Shore lexicon that is frowned upon by blog readers and editors alike so I will have to refrain from using it here) before taking to the street where he wrestled with Pauly D, stole some flowers and went all Rocky Balboa atop a large concrete ball. 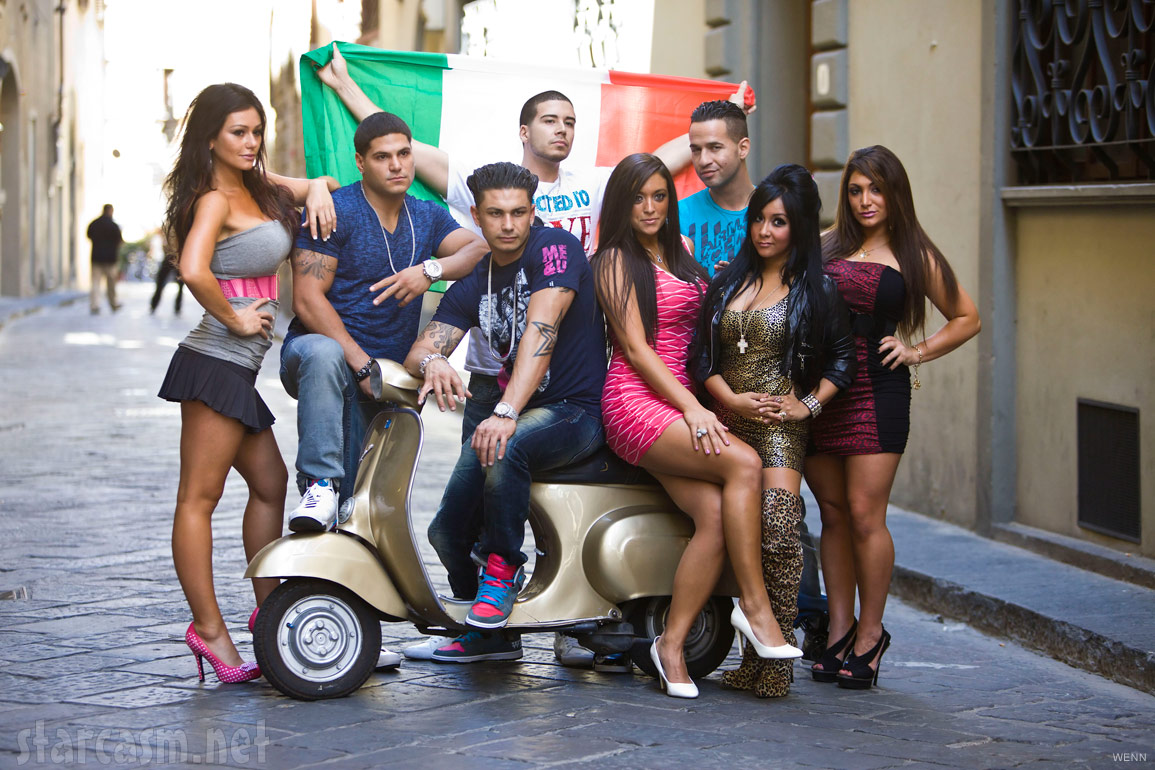 The crew never looked better! The entire cast poses with a Vespa scooter as Vinny lifts an Italian flag in the background. (Is that Lee Greenwood I hear?) 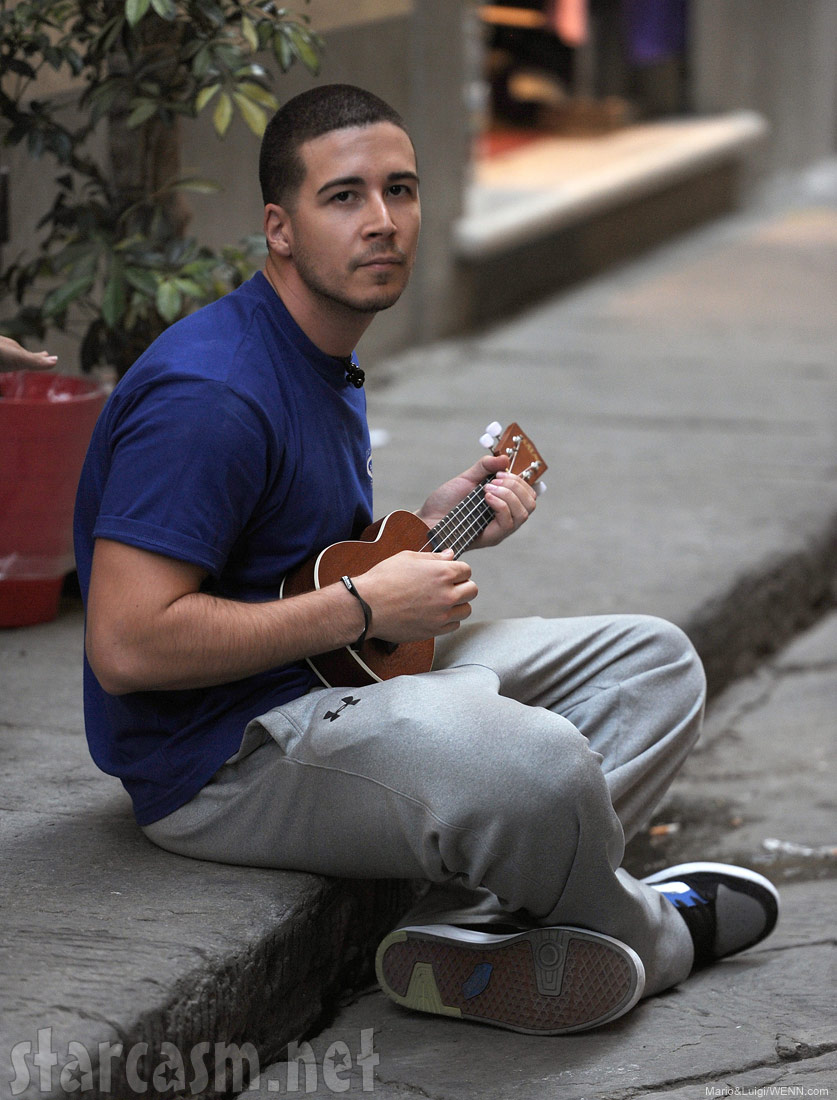 I think this is the only photo on the list in which a Jersey Shore cast member seems to fit in to their environment. In this photo of Vinny Guadagnino sitting on the sidewalk strumming a ukelele in understated Jersey Shore attire the native New Yorker looks as though he was born and raised in Florence! I’m not sure what the Italian term is for adorable, but Vinny is definitely the poster dude for it here! 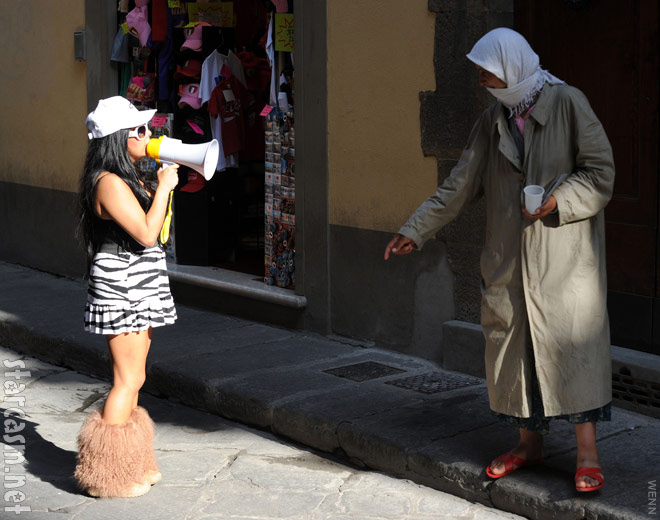 I wrote what amounts to an essay about the merits of this photograph, which features Snooki speaking to a gypsy (who was asking for change) through a bullhorn.This picture sums up everything about Jersey Shore filming in Florence and could very well deserve a spot alongside the likes of Leonardo da Vinci and Caravaggio on the hallowed walls of the Uffizi Gallery! (If they displayed 21st Century photography) I feel it’s important to mention that the gypsy was so perturbed by the diminutive American that she out a curse on her. I’m sure the house had a field day with that one!

All photos: Mario & Luigi / WENN.com unless otherwise noted. (Speaking of which, I would like to send some serious kudos out to whoever Mario & Luigi are! We use various photo services, including WENN, and rarely deal with photographers directly. But far and away the best and most consistently high quality images of the Jersey Shore cast in Florence always had their names in the credit line. Thanks Nintendo dudes!)

JWoww “f**king hates” being pregnant because thighs touch and whatnot