Season 5 of Top Chef was yet another fun season of conniving, surviving and “pack your kniving” that resulted in the launch of yet another funky-haired reality show celebrity – the muppet-esque Carla Hill.

At the beginning of the season Carla spewed forth apologies for this error and that error, and it seemed as though Wolfgang Puckwheat was gonna be just another flash in the frying pan. But, the chefro managed to not get eliminated long enough to realize the judges liked it when the contestants made very uncomplicated dishes that tasted good. So, she rode the “simple-but-good” horse right up until the final episode when she opted to step outside of her comfort zone by taking the advice of her sous chef Casey Thompson, who suggested using the sous-vid method to cook the meat (stick it in a plastic bag in hot water) and also thought a soufflé would be a good idea.

Of course the meat was tough and the soufflé didn’t soufflé, so the judges weren’t able to vote with their hearts (or ours). Poor Carla was left at the Top Chef altar, slightly less teary eyed than the millions of Carla Hillions watching from home. 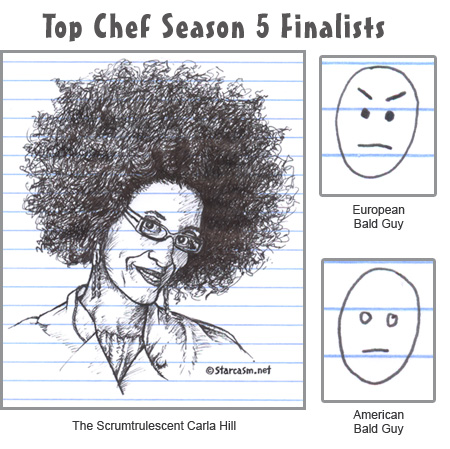 Anyway, as an ode to another successful season of a very well done reality show (one suggestion – show more of the cooking! Give us more details of what and why the contestants are doing, a-la Iron Chef) starcasm will offer the best quotes from Season 5 that we could gather – most of them real, but all of them accurate:

“This is not a butt-rubbing contest.” – Stefan Richter during the finale

“When I am faced with a beautiful, well-reared piece of meat, I don’t want to stand back and admire it, I want to have full-blown unprotected sex; I didn’t even get to first base with the pork.” – The almost overly starcastic judge Toby Young

“My car is a piece of……..poop” – Fabio Vivan on the hopes of winning a car

“Eh, whatever.” – Stefan on life, the universe, and everything

“Hootie Hoo!” – Carla on life, the universe, and everything

“This is Top Chef, not Top Scallop.” – Fabio

“OMFG!! These peas are like little green angel tear drops!” “I agree!” “Oh definitely. Best damn thing I have ever eaten in my life or any one else’s!” – Judges’ Panel on Carla’s mysteriously orgasmic spoon o’ peas.

“The meal I made was perfect. I can’t help it if the judges can’t recognize perfection.” – Jeff McInnis every week

“First off, I want to say it is such an honor that Stefan didn’t win. This is for all those people that said he could do it. I proved them all wrong! Stefan losing is the the greatest accomplishment of my life!! I only hope that he can somehow continue not living up to your expectations. I’d also like to thank God. I prayed for something not to happen and he answered my prayers. I can’t believe that isn’t happening! I can’t believe he didn’t win! This is the happiest day of my life!!” (sobbing) – Hosea on winning Season 5 of Top Chef

“Look at us!! Pay no attention to the voices or the food. LOOOOOOK AT USSSS!!!” – Melissa Harrison’s bangs and eyebrows

“I have found that the best method of preparing wounds is to rub a little salt in them.” – Stefan

“It was the bland leading the bland.” – Toby Young on Eugene’s daikon fettucini

And the exchange that summed it all up:

Carla: I knew my dishes were going south. At that point, it really wouldn’t help the diners if I was in a bad mood. So my thing was, I’m just going to send out some Love with this stuff I’m giving you—
Tom Colicchio: How could your enjoyment impart enjoyment—
Carla: That is my belief, Tom!
Tom Colicchio: [Complete bewilderment]

Be sure to check out our Mystery Science Photo animated episode with Top Chef Season 5 contestant Melissa Harrison!

On another note, head judge Tom Colicchio has been put on the defensive of late because of the season finale outcome, telling People magazine, “If I had to do it all over again, reading what I’m reading, I’d still say Hosea wins. He made a better meal.” Fans claim to be in an uproar over the results for all kinds of different reasons, but it’s really because nobody was pulling for the chef that won.

Carla was the only charismatic one left after Fabio was eliminated. Stefan had clearly established himself during the course of the season as the most talented of the remaining chefs. Hosea was pretty good at sneaking smooches with Leah and obsessing over Stefan’s successes and failures, but didn’t really seem to be anything exceptional in the kitchen. His true talent was excelling at the new reality show formula for success, which doesn’t have anything to do with winning week to week, but merely not coming in last. At the beginning of every episode, including the finale, I found myself saying, “Oh yeah – that guy’s still around.”

You won’t hear me complain about the results though. As much as I wanted Carla to win, nothing short of a time-traveling soufflé Viagra could change the fact that her soufflé didn’t rise. And, it appeared Stefan was a bit over-confident and kinda phoned it in. So, if the judges didn’t weigh in the chefs’ histories, then Hosea deserved the victory.

Tom sums it up this way:

Grrrrr! Just when I think I’m finished writing this post, I discover some other controversy! This one is from Carla’s assistant for the finale, former Top Chef contestant Casey Thompson. She tells SideDish that Bravo didn’t televise all of Carla’s shortcomings, and that Carla was “not prepared and in over her head.” Click the link for a detailed description of what the “send out the love” method of cooking looks like to a mortal chef. They just don’t understand Carla magic!!!