The front page of Digg – it’s the blogger’s equivalent of a teenage boy’s fantasy involving Mary Lou, a few drinks, and the backseat of a Chevy. Ahhh, that wonderfully awkward first time that pretty much everyone is inevitably unprepared for. This pimply faced blog is no exception. Our backseat moment came rather unexpectedly as our “How Bad IS Tom Cruise in ‘Valkyrie?’ The Critics Respond” post became “popular” on Digg in the waning minutes of its 24-hour window.

I remember watching a funny video that describes what the “first time” is like – including the server crash, excitement, anger, disappointment, and eventual resignation – and saying to myself, “Man, I wish we could become popular so our site would crash and we could be angry and resigned!” Careful what you wish for! Our experience was a little bit different that the one described by 10000words.net (the video is embedded below), thanks in large part to the fact that most of the traffic that might have been angry and critical of our little site, and its inability to handle the load of traffic, was instead focused on Tom Cruise. (Thanks for taking the bullet, Tom!) Anyway, in the tradition of teenage kiss-and-tell, here’s a graph of our “first time” so that others might be better prepared. 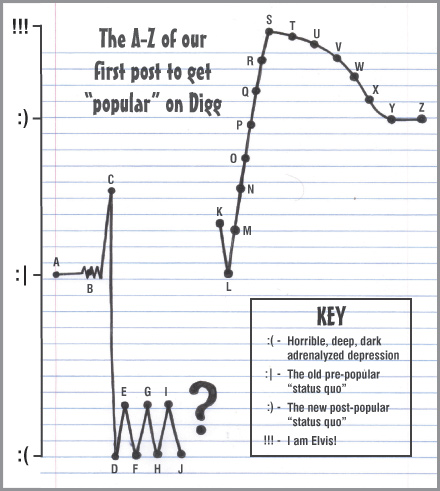 D. The site is completely down! It won’t load at all! Oh my God! There must be 100 million people trying to read how bad Tom Cruise is in “Valkyrie” and it won’t load! Think of all the pennies we’re losing from ads!!

E. I can’t believe we got popular on Digg!

F. Grrrr – The Site is STILL down! We got called “weak” in a Digg comment because our site crashed after only 90 diggs. Ouch!

G. Hmmm – Some traffic seems to be getting through because our traffic counter is going up.

H. Called our web hosting service and they don’t even know what Digg is! AND they say that we’ve exceeded our CPU usage per 60 seconds (whuh?!?) The site should come back up but will continue to crash if the traffic is too high. ARGHGGH!!

I. I can’t believe we got popular on Digg!

J. The site is STILL down! Screw this! Let’s go to the store and get some more of those Cliff bars they had marked down to 50 cents.

? – Trip to the grocery store

K. Whoah! Look at all those people that want to know how much Tom Cruise sucks!

L. Whoah! Look at all those people that don’t think Tom Cruise sucks and are upset that our post was biased!

M. Hey! The site’s not crashing at all! Look at all the happy peeps!

N. I want to finish the “Tony Romo is a Baby” post but I’m addicted to refreshing the traffic counter! It’s like a chia pet on fast forward!

P. (The entire starcasm staff decides to celebrate New Year’s early – one of us with a six pack and the other with a bottle of red wine.)

Q. What should we invest our ad money in? Should we buy a GM stock? Maybe four more Cliff bars?

R. I remember back when we used to be a humble blog.

S. This is the best! I feel like Elvis! No, I will not put my pants back on!

T. Man, that Blagojevich Top Ten post should have been popular. That was a good post! Tom Cruise in “Valkyrie?!?” Pfffft! Peanut Butter Blagojevich Time!!!!!

U. Ummm. OK. Lots of people are still looking at the site. I wonder what’s on TV.

Here’s the same experience from the viewpoint of 10000words.net: