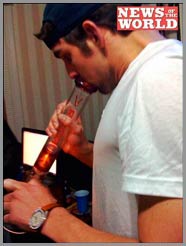 There was some concern that the recent photo featuring a bong and Michael Phelps doing the half-meter breath toke might cause him to lose a number of his endorsement deals, but after a public apology from Aqua Man it looks like Kellogg’s will be the only smoke-out fallout casualty. (The cereal giant has chosen not to renew it’s contract with Phelps after it runs out at the end of this month) Other companies have decided to stick with the eight-time gold medalist, including Speedo, Omega watches, Visa and PureSports athletic drink.

The Subway sandwich chain is not only sticking by its man, but is reportedly working on a brand new marketing campaign that will use the incident to their advantage in an attempt to expand into the paraphernalia market. Starcasm investigators turned up this exclusive ad with Subway’s new promotion: 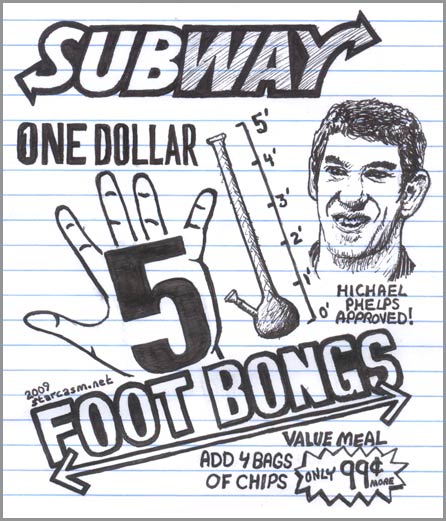 I wouldn’t know, but that sure sounds like a good deal.

A source close to a SubWay restaurant location tells us there are also plans in the works to start selling brownies. Can you say, “recession-proof?”

Ah, what the heck! I decided to do it in…ummm, I mean we also found a color version: 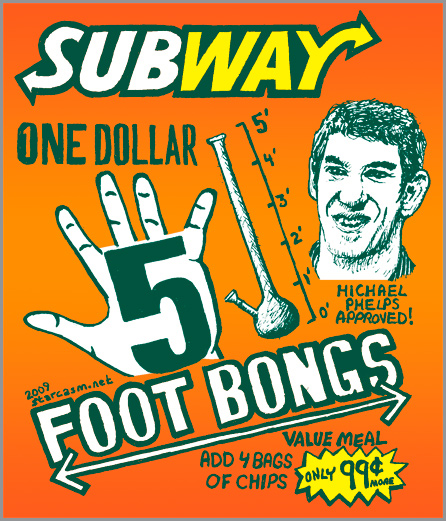 Michael Phelps’ girlfriend reveals she was born intersex, was charged with extortion