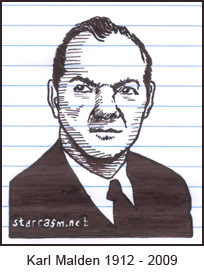 Broadway, film, and television actor Karl Malden passed away Wednesday, July 1 of natural causes. Malden, known for his unmistakable nose and realistic acting style, was the son of immigrant parents, a Czech mother and Serbian father. He was born in Chicago on March 12, 1912 with the name Mladen George Sekulovich. His family soon moved to Gary, Indiana, where Michael Jackson also spent his formative years. Malden later dropped out of college to be a steelworker, and then quit his job to pursue acting, a move his father didn’t approve of.

“When I told my father, he said, `Are you crazy? You want to give up a good job in the middle of the Depression?’ Thank god for my mother. She said to give it a try.”

Malden met his wife Mona at Chicago’s Goodman Theatre Dramatic School, which he got into after saving up money from extremely dangerous steel working jobs and talking the school’s administration into giving him a scholarship. His marriage, just like his acting career, was made to last; earlier this year the couple celebrated their 70th wedding anniversary.

After Goodman, Malden successfully tried his hand at Broadway where he met director Elia Kazan, who suggested he change his ethnic, hard to pronounce name. Kazan went on to direct Malden in the film versions of “A Streetcar Named Desire” (1951) and “On the Waterfront” (1954).

In this clip, you’ll see Malden in his Oscar-winning role as Mitch in “A Streetcar Named Desire”:

Karl Malden also served three terms as president of the Academy of Motion Picture Arts and Sciences from 1989-1992.

At Karl’s 97th birthday party this year, he let his last wishes be known:

“After I die, I don’t want you to do anything but have a party.”

K-Fat will lose weight for money! – Kevin Federline to slim down on VH1’s Celebrity Fit Club