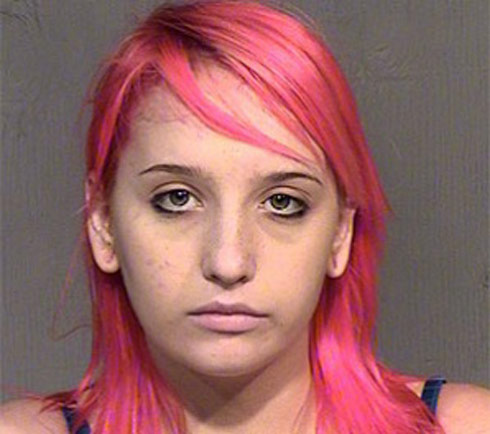 The following is a break down of some seriously bad parenting at the hands of 19-year-old teen mom Catalina Clouser from Phoenix, Arizona.

On Friday night Clouser and her boyfriend had been smoking a little weed at a public park. After this they decided to head to a store and buy some beer with Catalina’s baby in the car. Hey boyfriend was pulled over and popped for DUI. Being upset over that whole situation, Clouser decided to take herself and her child to a friend’s house where she, “admittedly smoked one or two additional bowls of marijuana.”

After getting stoned Clouser thought it would be a good idea to head on home with her infant son asleep in the car seat. It wasn’t until she got home that she became aware that her son was missing. According to Phoenix Police officer James Holmes:

“It appears the suspect put the baby on the roof of the car and drove off, forgetting he was still on the roof.”

Freaked out, Clouser started dialing up friends frantically attempting to retrace her steps trying to figure out the location of her son. Once she pieced together what had happened officers were already on the scene. Holmes added:

“The officers did find that the car seat was damaged. There were scrapes on the car seat, obviously from a fall. We’re thinking that based on her possible impairment, she just didn’t realize that she had placed that baby at one o’clock in the morning on top of the car when she took off.”

Both Holmes and local station KTVK have reported that the 5-week-old infant is, “perfectly OK,” and that he has been placed in the care of Arizona Child Protective Services.

Catalina Clouser was arrested and has been charged with aggravated DUI and child abuse.

Celebrity SWATTING pranks are out of control