Here’s the latest addition to the Starcasm Pinup Collection in honor of Marvel Entertainment’s announcement that Scarlett Johansson has been signed to play the role of villainess The Black Widow in the Iron Man sequel due out in 2010. No complaints here, unless one of The Black Widow’s super powers involves singing. 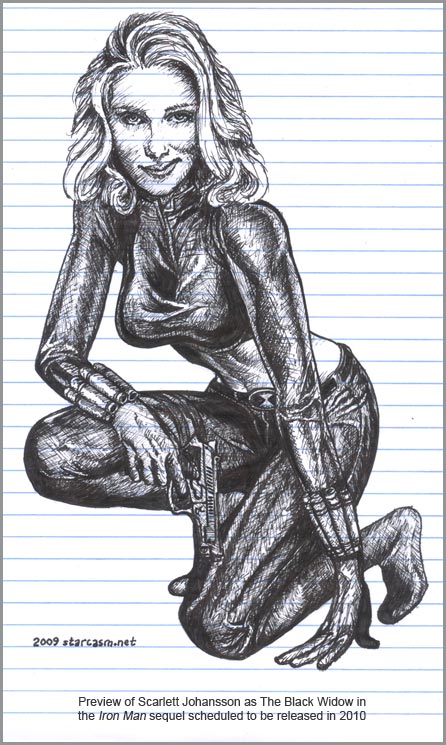 ScarJo will be starring opposite Robert Downey Jr. along with Terrence Howard replacement Don Cheadle as Col. James Rhodey Rhodes, a returning Gwynneth Paltrow as the Man of Iron’s assistant Pepper Potts, Samuel L. Jackson as Nick Fury, and Wrestler star Mickey Rourke as the villain Whiplash. (This was initially going to be a drawing of Mickey Rourke as Whiplash, but as it turns out, the comic book character wears a mask that completely covers his face, so what would be the point? I guess he could have been holding a chi-hua-hua)

PHOTOS Why does Scarlett Johansson have a sunrise tattoo on her arm?

Will Scarlett Johansson play Marilyn Monroe in ‘My Week With Marilyn’?