Deadlinehollywooddaily.com is reporting that Marvel Studios has cast the role of Thor, officially ending months of speculation that most famously had Brad Pitt picking up the hammer and donning the winged helmet. Their final choice might suggest the  initial installment of the Thor franchise will be subtitled “The God of Thunder Down Under” because A Norse is a Norse of course of course, unless of course the Norse of course is the famous Chris Hemsworth! That’s right, Marvel is going with the Australian actor that recently had his American film debut as Captain Kirk’s dad in this year’s summer blockbuster Star Trek.

Hemsworth’s role as Thor can be added to an impressive list of upcoming projects for the young actor that include Joss Whedon’s Cabin in the Woods and the lead in the Red Dawn remake. (Marvel has to love the notion of their future Thorboy screaming “Wolverines!”) Hemsworth joins director Kenneth Branagh and Samuel L. Jackson as the only names attached to the project so far. Production is due to start in January of next year with a tentative release date of May 20, 2011. 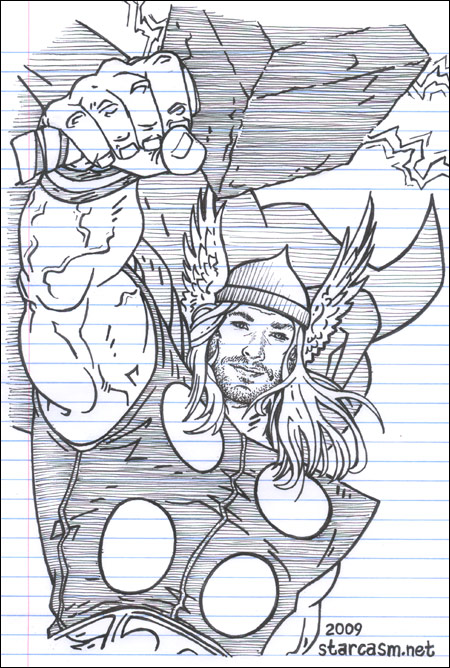 My only hope is that Kenneth Branagh’s experience with directing movie versions of Henry V, Much Ado About Nothing, Hamlet and As You Like It doesn’t mean Thor will retain his notoriously hokey Shakespearean speaking style – I just can’t imagine a super-hero action movie working when the hero’s catch phrase is “How do I detest thee? Let me count the ways.”