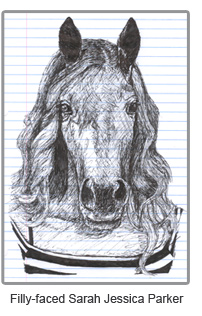 What’s the best way to fix a marriage on the rocks? Just rub some babies on it!

Sarah Jessica Parker and Matthew Broderick’s marital difficulties over the past year have in the tabloids and are rumored to stem from Matthew’s inability to keep his Bueller in his pants. But, it appears the couple is trying to make it work with the “Take two of these and call me in nine months” approach. Representatives for Broderick and the famously horse-faced star of the Sex and the City franchise have announced the two are expecting twin girls through a surrogate pregnancy. Their publicists released a statement stating Matt and Jess “are happily anticipating the birth of their twin daughters later this summer with the generous help of a surrogate. The entire family is overjoyed.”

No other information is available about the two little Seabiscuits in the oven or the surrogate mother, but assuming that the twins are from SJP’s eggs, I am proud to present this exclusive image of what the twin girls will probably look like: 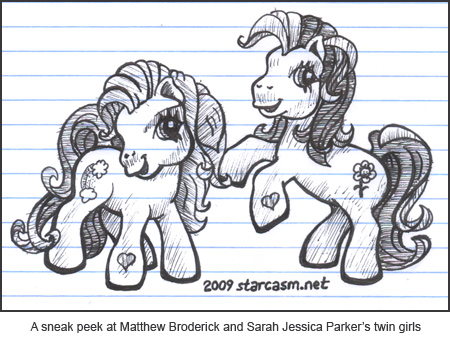 (Sponsored by the good folks over at sarahjessicaparkerlookslikeahorse.com)

Expect “My Little Parkers” to hit stores before Christmas