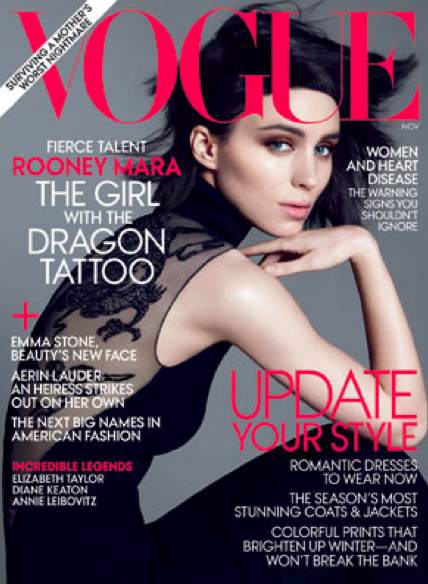 Rooney Mara is coming into her own with the role of a lifetime. She’s playing Lisbeth Salander, the title role in the highly anticipated David Fincher adaptation of the late Steig Larsson’s world-wide bestselling thriller trilogy The Girl With the Dragon Tattoo. But, she’s had to endure some brutal physical and emotional challenges in order to tackle the role, including starving herself, drinking in excess, and enduring physical violence while making the movie’s rape scenes.

Mara is a David Fincher veteren, playing Mark Zuckerberg’s disgusted girlfriend in the first sequence of The Social Network. She’s grateful for her poised position on the edge of massive fame, and she’s also enjoying these few precious moments right now while she’s still working her dream career, but isn’t a yet big star. She told Vogue:

“Where do I go from here? I’ve been trying to really live in the moment because I will never get this part of it back. As soon as the movie comes out, everyone will turn it into what they believe it is, so I’ve really been trying to appreciate every minute of now. Because I know what’s coming.”

The three films are being filmed back-to-back, and Rooney’s pretty much committed to keeping the same edgy haircut and rail-thin body for the next three years or so. She’s also getting the education of a lifetime working and living so closely with co-star Daniel Craig, director Daniel Fincher, and his partner Ceán Chaffin, who takes care of Rooney and serves as her publicist.

Rooney’s character Lisbeth is a strategic, slightly autistic girl, who poses a front of aloof aggression to mask her vulnerabilities. She grew up in a cruel world with no one to trust, and uses her fierce intellect and her own stringent moral code to survive. She’s also rail thin and subsists solely on cheese sandwiches and Billy’s Pan cheese pizzas.

In Rooney’s Vogue profile for the November cover, she’s asked if she had to had to get “unhealthy skinny” to play Lisbeth, Rooney replied “Umm . . . not really.” David Fincher quickly interjected “It hasn’t been too hard for her.” This all happens after David and Rooney sit down at a restaurant, and David nudges her saying “you can eat.” Then he jokes about how she’s permitted to eat “lettuce, and a grape, a raisin if you must.” But the joke turns into reality when Rooney only orders fish and barely touches it. This type of behavior usually isn’t exhibited even by the thinnest of the thin. Most actresses, even if they look like they eat only celery and black coffee, will make a show of gorging themselves on high calorie foods during an interview. The NY Times even has a name for this publicity behavior: DIPE, Documented Instance of Public Eating.

As Jeff Gordinier describes the trend: “A writer meets a starlet for breakfast, lunch or dinner. The starlet, usually of slim and gamine proportions, appears to thwart our expectations by ordering and consuming, with conspicuous relish, a meal that might satisfy a hungry dockworker.”

Rooney also took Fincher’s advice to drink heavily all night so she’s look extremely rough for a photoshoot the next day: “She mentions a time Fincher said, ‘Go out and get really, really drunk and come in the next morning so we can take pictures of you.’ He wanted to show Sony that she could look strung out. ‘And I did it!’ says Mara. ‘Threw up all night!’”

She also took a physical beating during the movie’s violent rape scenes:

“I don’t know how to describe it,” she said. “I think, physically, it was hardest. I got really beat up. But I gave myself a few days and then I was fine.”

It sounds like Rooney is enduring some pretty tough physical and emotional stresses to pull off this compelling role, and we’re extremely excited to see Fincher’s adaptation of this engrossing story. If you haven’t already read these addictive and well-written novels, load those suckers on your iPad or Kindle ASAP!

Who is Rooney Mara dating?

First photos of Rooney Mara as Lisbeth Salander, The Girl with the Dragon Tattoo