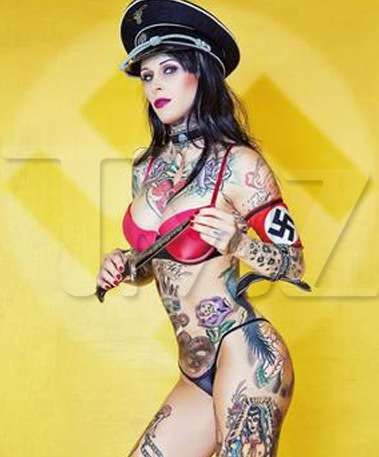 Apparently she is a mentally ills, abuses pills, and that stripper name Avery? That’s the name of her five-year-old son.

Oh, and she also dressed as a Nazi for a photo-shoot (via TMZ), has a swastika tattooed on her belly, does the Nazi salute, has the letter “W” on her left leg, and “P” on her right,which she tells people stands for “White Power.”

And just when you think matters couldn’t be made worse, they are. She has a Jewish son named Elijah.

Here’s a revealing statement from the custody papers (via Celebrity-Gossip.net):

“It seems as the years go by Avery’s mother slips more and more into stripping, pills, alcohol and performances she does online, pornography that she has brought into her home. There have been pornographic shoots there and live WEB cam pornographic broadcasts from her house.

I believe that Michelle is mentally ill and should be in the care of a therapist which the court ordered her to see, but she refuses to do so. She is supposed to take medication for bi polar disorder but she doesn’t.

Meanwhile, Sandra Bullock is confirmed to be living separately from her husband Jesse James since Monday. McGee told InTouch Weekly that she engaged in an 11-month affair with James because she believed his marriage to the Oscar-winning America’s Sweetheart was a sham.