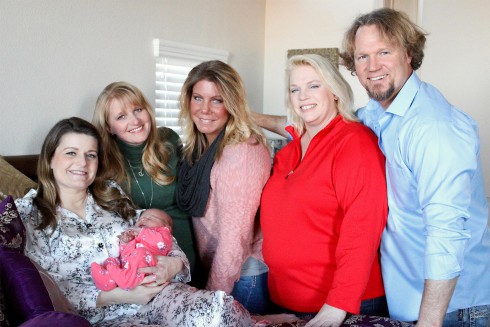 When Robyn and Kody Brown welcomed their second child together in January, TLC shared photos of the whole Sister Wives family as “one big, happy family.” However, the clan is reportedly cracking behind the scenes. According to a new story from In Touch, Kody’s first three wives “all have one foot out the door.”

The existing tension within the family reportedly escalated after first wife Meri Brown was involved in a catfish scandal last summer. Meri seemed eager to separate herself from the polygamous marriage after that point — and, now, an insider says Christine Brown and Janelle Brown have followed. “The idea that the Browns are a polygamist family is laughable at this point,” an insider said. “It’s just Kody and Robyn who are truly together at this point.” Another “family insider” recently told Life & Style Kody is only intimate with Robyn.

The latest insider said Robyn, Kody, and their newborn will be the focus of Sister Wives in the upcoming season. “That will allow for Janelle and Meri to slowly begin their exit,” the source said, explaining Janelle told the family she wants to work on her real estate career full-time. “This is the beginning of the end for the Brown family.”

The family has not responded to the reports.