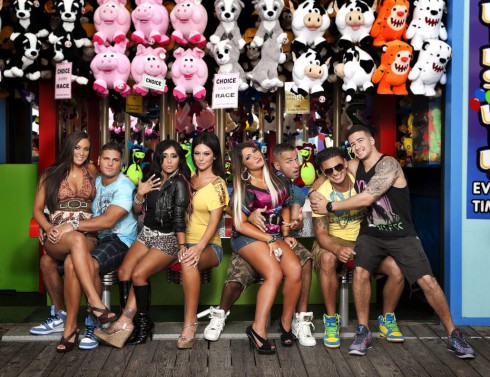 Who would have guessed back in December of 2009 that those seven gym-, tan-, and laundry-loving Seaside Heights, New Jersey beach house roommates would be able to drink and party their way into becoming some of the biggest celebrities on the planet, raking in millions of dollars and millions of fans in five seasons of one of the most popular shows in the history of cable television?

Now, as the original crew (minus Angelina Pivarnick and plus Deena Cortese) return to Seaside Heights once more, and the MTV cameras begin rolling on the sixth season, In Touch reports that this go around will be the last. According to the tabloid, the crew sat down with the cast when they arrived in Seaside Heights on May 31 and dropped the bomb:

“An executive producer announced that this season will be the last,” an insider reveals in the new issue of In Touch, on newsstands now. “She stressed to the cast that fans will remember them for this season, not the first, so they should bring their A game.”

“They decided to make the most of their final days at the Shore,” adds the insider.

Though the announcement made to the crew is likened to a bomb being dropped above, the announcement is really no big surprise. The cast members are getting older, with Snooki expecting her first child, and Mike “The Situation” Sorrentino recently getting out of rehab for his prescription pill addiction. Pauly D’s spin-off series The Pauly D Project has fared poorly in the ratings, with few expecting the new series Snooki & JWOWW to do much better. In other words, the writing (much like The Situation’s head in Italy) was on the wall.

That being said, MTV are experts at milking a good thing, so I’m sure we can expect to see (in some form or another) a Jersey Shore 2 with an entirely new cast of young reckless party-goers with little in the way of life goals, but a lot in the way of living for tonight. (Actually, the network reportedly already has a similar series planned replacing Seaside Heights, New Jersey with the state of West Virginia for Buck Wild.)

Either way, I think we can all expect the Jersey Shore cast (minus pregnant Snooki perhaps) to do what they do best by ratcheting up their inner Bohemians for the upcoming season, leaving nothing on the table. Well, except for empty bottles, underwears, and a much-used duck phone.

Jersey Shore: How does Sammi Sweetheart feel about Ronnie’s drunken confession that he still loves her?