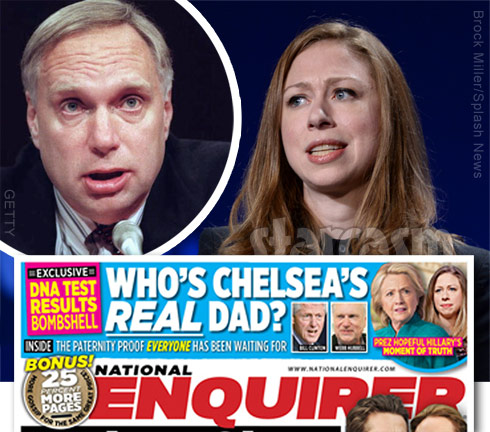 The 2016 presidential election is still sixteen months away, but scandalous headlines are already popping up for the contenders. In this week’s issue of The National Enquirer, the tabloid claims that after an “exhaustive investigation” it obtained the results of a DNA test that leaves open the possibility that Bill Clinton may not be Chelsea Clinton’s biological dad. The new report adds fuel to a rumor fire started last year when it was reported that Webster Hubbell, the former mayor of Little Rock, Arkansas, is her real father.

From The National Enquirer:

An exhaustive investigation by The National Enquirer obtained “touch DNA” samples from both Chelsea and Webb Hubbell, samples that were turned over to a nationally recognized laboratory that specializes in paternity testing.

In a bombshell revelation that threatens to turn Hillary’s 2016 presidential campaign into absolute chaos, The Enquirer has learned the lab result has been sensationally declared “inconclusive.”

A lab official confirmed that finding “does not discount the possibility” that Webb could be Chelsea’s biological dad!

(I’m not sure what “touch DNA” samples are, but I’m going to guess that they often lead to “inconclusive” results.)

Last year political blogger Robert Morrow was the first to draw attention to the potential paternity issue, and The National Enquirer followed up by speaking with former Clinton aide Larry Nichols, who recalled a conversation in which Bill Clinton allegedly revealed he was sterile and that Chelsea’s biological father is Hubbell.

Hubbell says the conversation in question took place at the Arkansas Governor’s Mansion in 1984, at the same time that infidelity rumors were swirling around Bill Clinton. From The Enquirer:

“We were discussing this woman’s claims that Bill had knocked her up and what we should do about it,” said Larry. “But he denied that he could have gotten her pregnant. He said he had measles as a kid and that rendered him sterile! “His exact words were, ‘I shoot blanks.’

“Stunned by what I’d just heard, I asked him, ‘Then what about Chelsea?’

So it looks like Hillary Clinton won’t need to worry so much about answering questions about the economy, Obamacare, race relations, and the global economy in light of the current situations in China and Greece — instead, she will be bombarded with questions about her email address and whether or not Bill Clinton is Chelsea’s real dad.