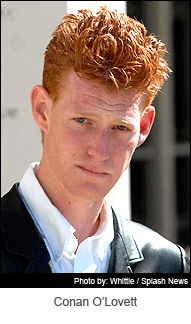 Conan O’Lovett has been arrested on drug charges once again. TMZ reports that Redmond O’Neal was dropping a couple friends off at a prison to visit a jailed bud when his vehicle was stopped by an officer for a routine security check in the prison parking lot. Redmond admitted to being in possession of narcotics and after being searched, was arrested for possession of a controlled substance with the added bonus charge of bringing drugs into a secured jail facility. TMZ says the drug in question is most likely heroin.

Just in case being a convicted drug user getting arrested in a prison parking lot for heroin possession wasn’t enough to warrant an appearance on “America’s Dumbest Criminals,” starcasm has obtained an exclusive photo of O’Neal’s vehicle, which will almost surely seal the deal: 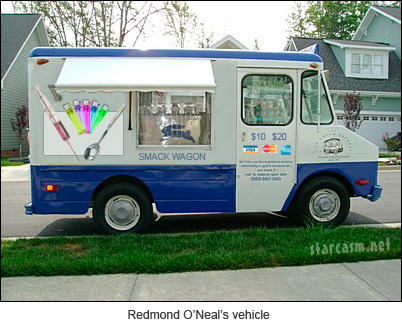 In addition to the laundry list of negative adjectives, Redmond is also guilty of bad timing. He is the son of actor Ryan O’Neal and actress Farrah Fawcett, who is currently battling cancer in a Los Angeles hospital. People Magazine reports, “the iconic Charlie’s Angels actress has undergone chemotherapy and aggressive alternative treatments. She saw her cancer go into remission, only to return in May 2007.” Her physician tells People, “She’s able to walk. And she remains in good spirits with her usual sense of humor. She’s been in great shape her whole life and has an incredible resolve and an incredible resilience.”

That is great to hear! Get well soon Farrah!