Whew! This show is FUN with a capital F, U and NeNe! By far the most joyful Housewife show to watch! In case you missed this week’s episode, thanks to the fine folks at Bravo you can watch it in its entirety here.

This week’s episode started off with Sheree Whitfield and her friend Tania rehashing the Anthony Shorter party planner brew-ha-ha from last week’s episode. (Ahhhhhhh, they could have rehashed that for half an hour with bonus footage and cast commentary and I would have been fine!)

Next is a brief stay with Lisa Wu Hartwell, husband Ed and the super-happy head-buttin’ EJ discussing the possibility of Ed playing in the NFL again. Meh.

On to the Queen of the Real housewives of Atlanta NeNe Leakes who gives Kim Zolciak a call to hook up for drinks at Cinco’s. Mmmmm…scheduled drama. Now we’re talkin’!

Then it’s over to Kim’s house where her poor man’s version of Dwight is there to help with a dress or something, but it winds up being Kim’s chance to flaunt all the super-expensive accessories she has and doesn’t want like a $3500 purse, over-sized implants and Big Poppa. Actually, is no longer her accessory (or vice versa) because they’ve “split up” for the time being. Kim talks kindly about NeNe while trying to wedge her bubbies into a series of dresses that have no hope of containing them. 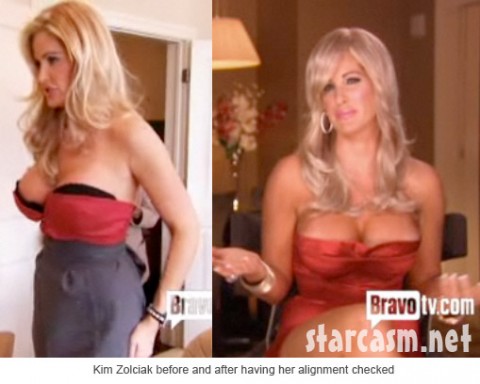 Where to now? Why don’t we head to…the firing range! Sheree must have really been affected by her run-in with party planner Anthony, possibly worried that the next party planner might have an answer for, “Who gone check me boo?!?” (Actually, she later reveals that the isolated location of her new home was her main motivator.) Firing guns and listening to Sheree’s mighty fine friend talk about her time in Iraq and all the firearms she’s familiar with is enjoyable enough, but the highlight here was WITHOUT A DOUBT Sheree’s tushtastic badonkadonk wrapped super snugly in a pair of leather pants and finished off with some black silver-studded high heeled shoes! Booyeah! I gotta find a screen capture of that! Combine that with last week’s smackdown of Anthony and I think I’m really starting to like Sheree!

Alright! I was able to piece together a rough panoramic shot of Sheree’s trunk o’ junk in photoshop. I wish it was better quality, as in “poster on my wall,” but I’ll have to settle for what they give me…

Back to Kandi talking about what she’s read on the internet about her fiance being a deadbeat and whatnot. (I don’t know what she’s talking about. This is the only blog worth reading and we ain’t said jack about her deadbeat baby factory!) Poor Kandi gets pretty emotional about it all, especially the fact that they said she paid for her own ring. Things take a turn for the better with an announcement of a hardcore Southern breakfast of fish and grits…

On to Cinco’s and the meeting between Kim and NeNe. I was thinking this was gonna be the typical drama-filled awkwardness that seems to follow Kim around like a little puppy. The “girls” have some margaritas (NeNe needs to learn to drink martinis ucz it would be mighty fun to say “Give me a NeNe Martini.) As usual, NeNe cuts to the chase and brings up the problems with the she said, she said drama between the girls. Kim promises to have a sitdown and then the girls get downright “old school!” NeNe pokes fun at Kim breaking up with Big Papa, claiming she was gonna be right back with him in a week. Kim takes it the right way and before long Kim was on her lap and the girls were talking plastic surgery and tickling bubbies! Why can’t they just get along? NeNe’s sooooooo awesome when she can relax and have a good time! And when that happens, Kim is tolerable by association. (Kim actually said, “Don’t touch my fake titties!” joyfully.)