Project Runway is BACK! Fans like myself will no longer be resigned to Kenley Collins kitten conflicts, bizarro Heidi Klum photoshoots and Tim Gunn laundry detergent commercials! NBC Universal (the parent company of Bravo) and The Weinstein Company (owners of Project Runway) have settled their legal dispute over the show’s transition from Bravo to the Lifetime Network.

The dispute was over whether or not Bravo should have been given the chance to match Lifetime’s offer, which they claimed was their right under the terms of the contract. According to a joint statement issued by the two networks, “The Weinstein Company will pay NBCU for the right to move Project Runway to Lifetime. All of the parties are pleased with the outcome.” 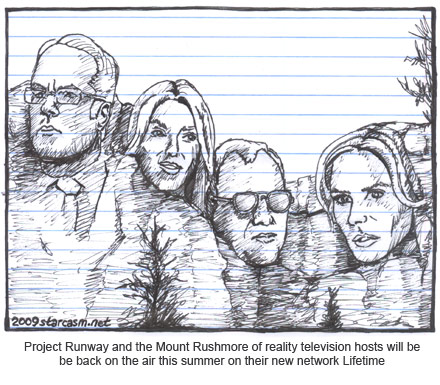 No specific date has been set for the beginning of Season 6, only that it will be sometime this summer. The season has already finished filming, including the Fashion Week finale recorded February 20. The final shows were presented to the live audience in attendance without revealing the identities of the designers to prevent any information about the season’s outcome from being revealed.

Another unique aspect to Season 6 is that it was filmed in Los Angeles instead of the usual setting of New York City and features Hollywood celebrities like Christina Aguilera, Eva Longoria Parker and Rebecca Romjin. I can’t wait for the tar pit challenge!

Bravo revealed on Tuesday that it will be launching a new design competition show with the remarkably unremarkable title The Fashion Show on May 7. The show is similar to Project Runway but will also allow viewers’ votes to figure into who stays and who is eliminated week to week. Set to host the show are Kelly Rowland and Isaac Mizrahi. Pffffft!!! I’ll tune in, but only because making fun of it will be like shooting fish in a barrel! (Click here to check out the contestants)

Just to kill time, here are some better names for Bravo’s replacement show: