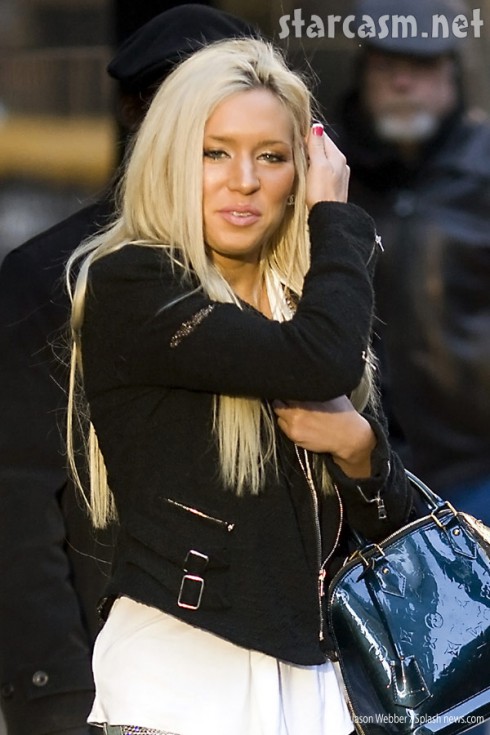 She also made a show of getting the remaining $22,000 from her $30,000 check (the bank didn’t have enough money the first time she went to cash it.) Hopefully she’ll be sending some of that money to the taxman, because there’s no way the IRS won’t know about that little cash payment.

Anyway, before Kacey (given name: Courtney Roskop,) was hittin’ it big with Crazy Charlie and his five tennis balls of coke, she allegedly had a brief relationship with George Star from MTV’s True Life: I Have a Digital Drama. This was, of course, several years after she aborted Kevin Federline’s baby and babysat his children with Britney Spears.

A poster on a forum noted:

She was dating my boy GStar for a few months before she began her coke and drug binge.. and now she’s banging movie stars. lol.. From MTV stars to Movie stars and blow.. she’s doing big things.. hahaha

In early January she tweeted about breaking up with a boyfriend (GStar?) and then tweeted that she was going to commit suicide by taking a bottle of Xanax: 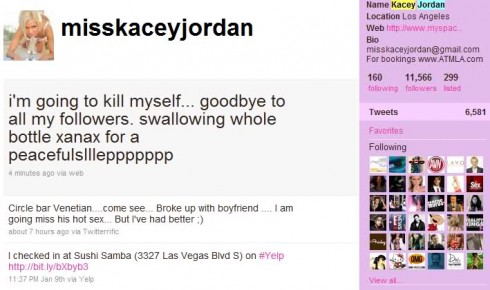 Despite reports that Charlie Sheen had gone into rehab for three months, he is still at his house. He personally tweeted to RadarOnline that he was fine, and called people making a big deal about his binges “turds.” People who care about Charlie, including his dad Martin Sheen, desperately want him to seek treatment, but “sources” say he still doesn’t think he has a problem.

Either way his massive hit sitcom Two And a Half Men (which receives much higher ratings than funny gems like The Office, 30 Rock, and Modern Family,) is currently on hiatus. Sheen reportedly makes $1.8 million per episode of the show, where he plays a character who drinks heavily and likes strippers.

Elle King opens up about experiencing depression and PTSD: ‘It’s like a trip on LSD’

Catherine Zeta-Jones back in treatment for bipolar II disorder