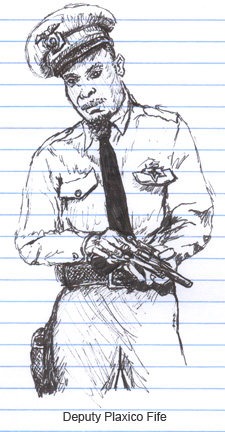 NFL All Pro wide receiver Plaxico Burress was arraigned Monday on two counts of criminal possession of a handgun after unintentionally shooting himself in the leg at a night club in Midtown.

Yet another incident in which a professional athlete reveals himself to be a well-payed 10-year-old boy that can’t tell the difference between reality and a video game.

It looks like Plaxico will be catching passes from Michael Vick soon! And with a minimum of a 3 1/2 year sentence for violating New York’s concealed gun law, his professional football career is more than likely over. Being the big-hearted helpsters that we are, we’d like to help ol’ Plax out with a potentially viable post-prison career move. Based on his adept skills at handling a firearm, we think he should star as Deputy Barney Fife in the CW’s remake of The Andy Griffith Show.

Here’s the “Plaxico Duress” story as it stands now:

Plaxico and four others, including teammates Antonio Pierce and possibly Derrick Ward, showed up at the Latin Quarter nightclub in Manhattan about 1:20 a.m. (Some reports have Burress explaining to a nervous security guard that he needed the gun for security reasons) About 1:50 a.m. a single gunshot is heard and Burress was seen on the ground shaking when a bloody .40-caliber Glock pistol fell out of his pant leg and onto the floor. At this point he said, “Take me to the hospital.”

Burress checked himself into the hospital (possibly under an alias) and was released 11 hours later. Police are upset that the hospital did not report the incident to authorities right away, which may lead to prosecution. There are also reports that New York Giants officials were slow to notify authorities as well.

In the state of New York, carrying a firearm without a permit carries a minimum 3 1/2 year prison sentence. Burress reportedly has an expired license from the state of Florida, but even if it were up to date, it wouldn’t exempt him from New York’s law.

Bail was set at $100,000 and Burress has hired attorney Benjamin Brafman, famous for getting P Diddy off of gun charges. Authorities are still trying to determine the role Antonio Pierce played in the incident and whether or not he broke any laws.

Mayor Michael Bloomberg, a staunch advocate of anti-gun legislation, has called for full prosecution. “I don’t think anybody should be exempt from that, and I think it would be an outrage if we didn’t prosecute to the fullest extent of the law, particularly people who live in the public domain, make their living because of their visibility — they’re the role models for our kids,” Bloomberg said.