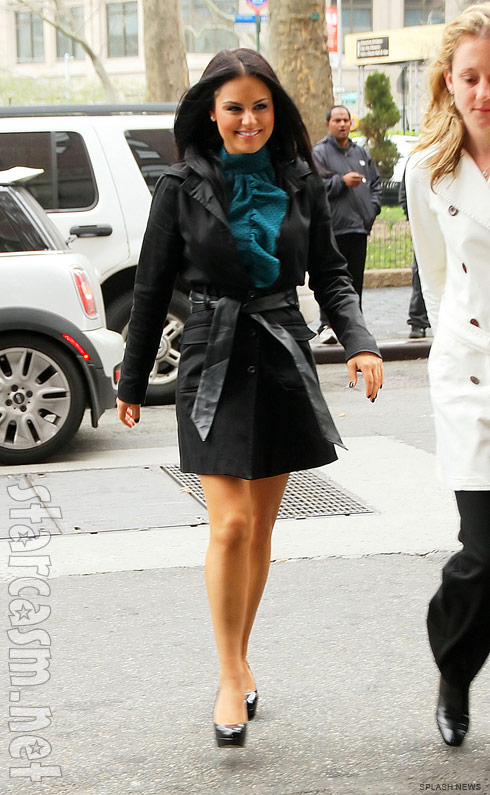 When the shocking announcement was made last Thursday that singer Pia Toscano had been voted off of American Idol after everyone (including starcasm!) assumed she was the favorite to win it all, my heart sank. How was I going to get my Pia fix?!? Little did I realize that the headline-grabbing early dismissal was just a catapult into fame and further glory for the 21-year-old star!

The Piaparazzi were in tow as Ms. Toscano made the rounds in New York City earlier today that included an appearance on Regis and Kathy Lee as well as visits to the studios of The Today Show and MTV! In these photos Pia can be seen in a stylish black overcoat, black mini-skirt and a ruffled blue-on-blue polka dot top. In other words… Piawesome!

And in case your mind’s eye was trying to see under that overcoat, here’s one of our looooooooooooooooong last look photos that will save you the trouble:

Since no one has done it yet, let me be the first to start the rumor that Pia will be appearing on Glee as Rachel’s long-lost older sister who was also given up for adoption and is currently a back-up singer for Beyonce. (The Beyonce part can change, but the rest is pretty much in stone.) Remember, you read it here first!