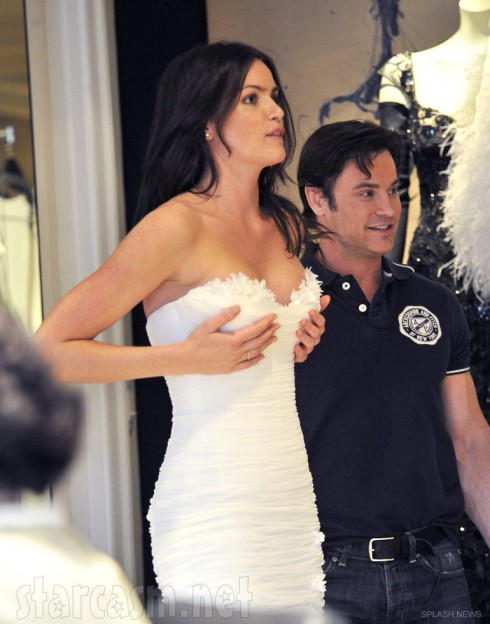 The Bachelor‘s Ben Flajnik has narrowed his field of eligible young ladies down to two: blonde horse lover Lindzi Cox and brunette model Courtney Robertson. Or, as the world refers to them: the good witch and the bad witch. (Or just the good and the bad witch, or good and evil, or…)

Bachelor spoiler extraordinaire Reality Steve revealed back in December that when all the dramatic smoke clears, model Courtney Robertson would take home Ben’s heart as well as his ring. Seemingly confirming that announcement, the 28-year-old brunette model was photographed earlier today trying on and buying a wedding dress in Hollywood, California! 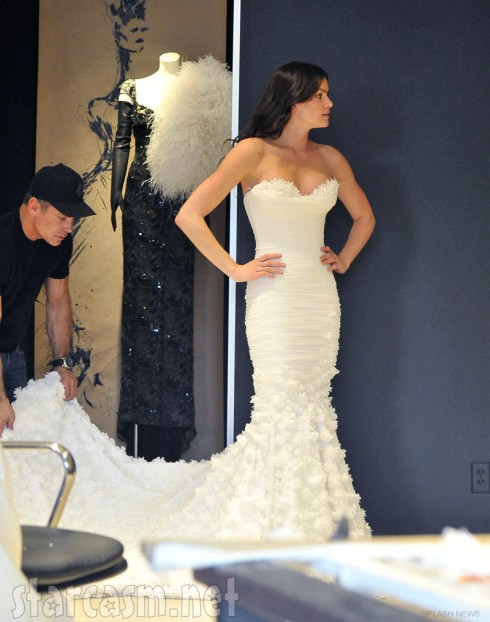 The dress is a strapless, form-fitting, feathered mermaid-style gown that looked absolutely fantastic on Courtney. (I think even Courtney’s detractors – like me – have to admit that she looks great here. Of course, that would all change if there was sound and she started talking…)

After seeing these photos I don’t think I can hold my tongue any longer about something that’s been bothering me for weeks now. I believe Reality Steve was wrong.

ABC is notorious for manipulating the drama on The Bachelor and The Bachelorette (Justin “Rated R” Rego? Michelle Money?), and who’s to say they didn’t set Steve up this season with a staged final rose ceremony and proposal with one of their “villain” plants? (Yes, I think they would go through all that trouble on account of Reality Steve) This whole Courtney thing has been just too ridiculous and over-the-top for them to allow Ben to choose her! I realize the show has next to no credibility whatsoever (What, one marriage in 16 seasons?), but this would completely zero them out.

Here’s my theory. Based on what I’ve heard about what goes on behind the scenes on The Bachelor and The Bachelorette, I think the leading man or woman decides pretty early on who it is they are going to choose, and then they remain open to doing “whatever” with the other contestants to help ratings. I think Ben fell for Lindzi early on and then agreed, whether openly or unspoken, to keep Courtney around for the drama and for the ratings. That’s all great and good (just look at all the coverage the show is receiving because Courtney is still around!), but it means nothing if he actually chooses her at the end!

These photos make me almost certain that Courtney does not wind up engaged to Ben. It makes ABSOLUTELY NO SENSE for Courtney Robertson to allow herself to be photographed buying a wedding dress just before The Bachelor finale! Unless it was just part of a ruse. Don’t you think Courtney would have tried on her dress in private somewhere? And would she be casually waving at the photographer if these photos were going to spoil the finale?

PLUS, the only recent photos of Lindzi Cox are paparazzi shots of her leaving an office building in Seattle with hair color the same as Courtney’s and hiding her left hand. (The photos can be seen on the Splash News site but they are a little too pricey to include here)

And let’s not forget that, despite all his huff ‘n’ puffegery to the contrary, Reality Steve is not infallible. If you recall, he told us last season that Chantal O’Brien took home the final rose before later finding out is was in fact Emily Maynard. He was also wrong Ali Fedotowsky when she was The Bacehlorette, he said she wouldn’t pick anyone, but she picked Roberto Martinez. Alhough they didn’t last, they stayed together for quite a while in Bachelor/ette months.

I realize that The Bachelor and The Bachelorette are essentially silly, but they are a business, and a very lucrative and successful business at that. It’s obvious that even Big Dumb Ben can see the show Courtney is putting on, and he just can’t actually be in love with her, so why choose her unless it was to benefit the show? And choosing her WILL NOT benefit the show! There has to at least be an inkling of believability for it to remain successful, and choosing Courtney at this point would absolutely erase all trace of that – as I’ve said before.

Blah, blah, blah… I guess what I’m saying is that if your workplace or Facebook group or favorite web site is running a betting pool on The Bachelor and most everyone is mopping up by going with whatever Reality Steve says, you might want to consider placing a small wager on Lindzi Cox. And as you’re raking in all that money (just like ABC will be with this “Shocking!” ending) be sure to mention that you heard it at starcasm first!

PHOTOS BIO Elyse Myers from The Bachelor 16 with Ben Flajnik