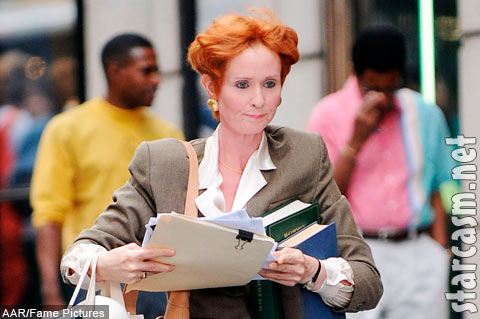 Cynthia Nixon was left off of my previous post of Sex and the City 2 1980s flashback glam photos, but that’s because there weren’t any photos of her available. Now we know why. It must take less time to create a 1980s look than it does to create a librarian clown. Fame Pictures says this is from the same ’80s shoot as the previous photos, but I don’t get it. Maybe the character Miranda Hobbes is actually an ageless vampire or Time Lord? And ageless librarian clown vampire or Time Lord! I think I’m talking myself into seeing this movie!

Either way, I talked myself into raising Miranda’s grade from an F to a D- only because of just how horrible Kim Cattrall looked.

My question is – when do we get to see Mr. Big in parachute pants and a Def Leppard t-shirt?!?

PHOTOS Sex and the City 2 cast unite for pictures