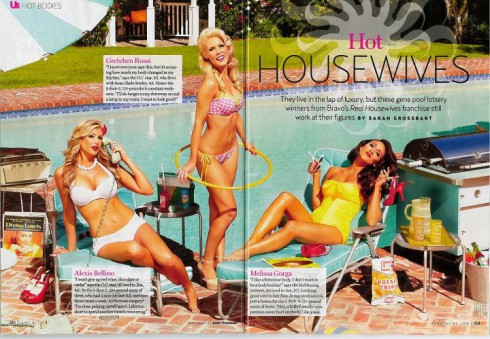 In case you’ve ever wondered what reality TV stars would have looked like if the genre had been big 60 years ago, the current “Hot Bodies” issue of Us Weekly has your answer! Check out the amazingly fun retro photo above (click to enlarge) of hot-bodded Bravo beauties Alexis Bellino, Gretchen Rossi, and Melissa Gorga lounging around the pool wearing retro 1950s inspired swimwear.

But don’t think these sexy Ms. Cleavers got their “hot bodies” easily! As the article’s subheader says, “They live in the lap of luxury, but these gene pool lottery winners from Bravo’s Real Housewives franchise still work at their figures.”

Gretchen Rossi (The Real Housewives of Orange county) “I know everyone says this, but it’s amazing how much my body changed in my thirties, ” says the O.C. star, 33, who lives with beau Slade Smiley, 43. Hence the 5-foot-5, 118-pounder’s constant workouts: “I’ll do lunges in my doorway or curl a lamp in my room. I want to look good!”

Melissa Gorga (The Real Housewives of New Jersey) “I like a feminine body. I don’t want to be a body builder!” says the kickboxing convert, 33 (wed to Joe, 37). Looking good next to her New Jersey castmates is is just a bonus for the 5-foot-4, 116-pound mom of three. “Hey, a little friendly competition never hurt anybody,” she jokes.

Alexis Bellino (The Real Housewives of Orange County) “I won’t give up red wine, chocolate, or carbs!” says the O.C. star, 36 (wed to Jim, 45). So the 5-foot-7, 120-pound mom of three, who had a nose job last fall, exercises three times a week. As for more surgery? “I’m done picking myself apart. Life’s too short to spend another month recovering.”

Fans of the Housewives shows are so divisive that I’m sure there are folks grumbling about Us Weekly’s choices for the spread, but I think if you go solely on the “hot bikini body factor” they couldn’t have done a better job! Say what you will about these ladies’ actions on the show, but there is no denying Alexis Bellino, Gretchen Rossi (remember her sparkly American flag bikini on the 4th of July?), and Melissa Gorga can rock some swimwear like few of their Housewives compatriots – or anyone else for that matter!

Remember, Brandi Glanville won’t be an official housewife until this coming season, Camille Grammer is no longer an official housewife, and people still don’t think Miami when they think Housewives, so sorry Adriana De Moura. The one big asterisk here? Ramona Singer! Ramona is 55 and she can fill out a bikini with the best of them! (Literally, if you look at her and Cameron Diaz side by side!)

Want to see more hot bodies? Be sure to check out the current issue of Us Weekly, on newsstands now!