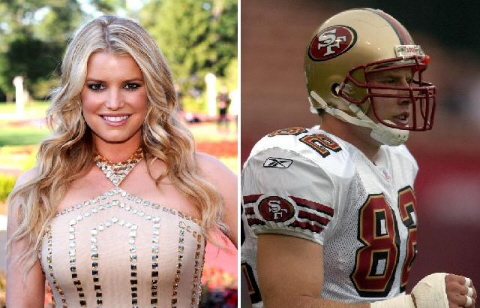 Jessica Simpson has got herself a new football beau! His name is Eric Johnson and he’s a retired “tight end” that played for both the San Francisco 49ers and New Orleans Saints. In football and dating circles going from the QB of the Dallas Cowboys to a retired TE might seem like a down grade, but let us all remember that in this fantasy draft it’s different stats we’re looking for.

During his playing days Johnson was known for his sure hands and we all know about Romo’s fumbling problems. Here’s another shot of the lucky man who’s getting to intimately look at that girl with them Daisy Dukes on.

Johnson,  30, was drafted by the 49ers in 2001 out of Yale University. That’s right, the woman infamous for asking about Chicken of the Sea has gone Ivy League! Here is Johnson making a play for the 49ers, I wonder if he can handle explosive sexual napalm like he handled opposing defenses?

Johnson recently split from his wife, filing for divorce in February.  He and Simpson have been an item since May according to a report from TMZ.   His best NFL season was in 2004 with the 49ers when he led the team in receiving with 82 catches for 825 yards and two touchdowns.

Good luck to Eric in his new career of being “that guy who’s dating Jessica Simpson.”  According to reports the couple are very happy together, for now.

UPDATE – Jessica and Eric are ENGAGED! Click here to read all about the proposal and see the ring! Congrats to Jesserica!

Jessica Simpson addicted to nicotine gum, but there’s a catch