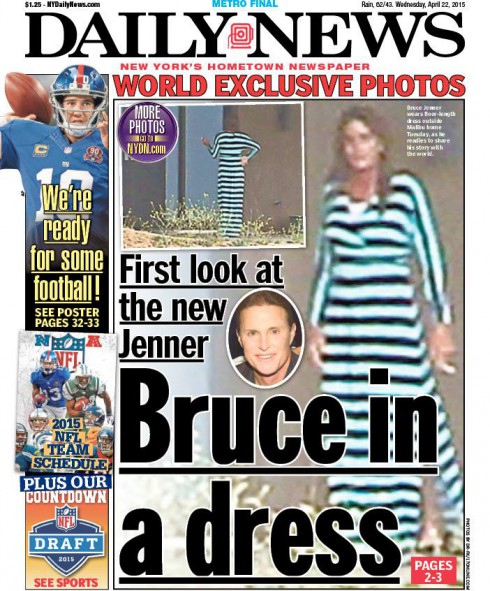 Days before his interview with Diane Sawyer is due to air on ABC, Bruce Jenner was photographed outside his Malibu home in a dress.

In the exclusive photos obtained by The New York Daily News, Bruce is seen smoking a cigarette while wearing a black and white striped maxi dress and sporting long, sleek hair. In recent months, he’s been seen in public with painted fingernails, lipstick and — most recently — a sports bra.

Although Bruce’s appearance continues to be heavily scrutinized, he said in a new ABC promo that his family members’ opinions are the only ones that concern him. He added, “I can’t let myself hurt them.”

However, Kardashian sources tell TMZ that ex-wife Kris Jenner is preparing herself for the worst when Bruce’s interview airs — and may take legal action if he “speaks negatively” and untrue things about her. The sources explained that Bruce mentioned his “tendency” to dress like a woman to Kris some 25 years ago, but she says he never brought it up again during their marriage and she never saw him dress in women’s clothes.

Sources close to Bruce dispute Kris’ story, saying he expressed his desire to transition years ago, but Kris convinced him to suppress it because she thought it would “hurt the brand.”

Kardashian drama: Did Kris Jenner cheat on Bruce Jenner with a younger guy?