For the French Premiere of her film Salt actress Angelina Jolie decided to go from a woman Russian spy to a woman who can spy Russia from her house!

The sexy action star pinned up her famously long hair and all she needed were some rimless rectangular glasses, a handful of layman catchphrases and a good deal of labial liposuction to complete her Palinization. Sarah Palin is a hot mama without a doubt, but if I had to lay my money down on the dogfight between these two pitbulls with lipstick my money is on Jolie!

Our team of imagineers spent the better part of the afternoon coming up with an accurate illustration of what Jolie will look like after the next stage of Palinization is complete: 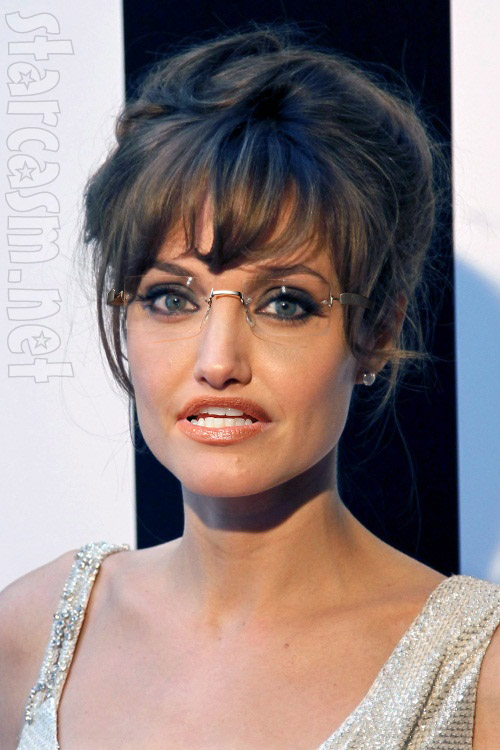 Here’s a side-by-side for comparison: 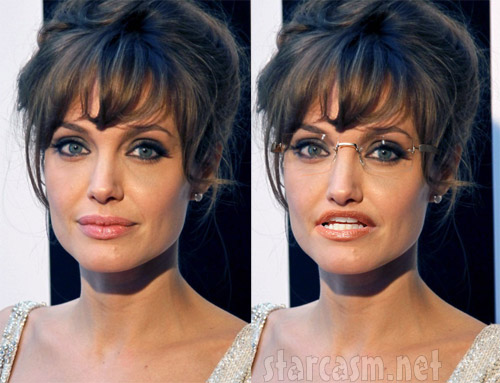 Hmmmm… She’s already starting to grate on my nerves! Maybe Angelina should rethink this transition and stick to being intimidatingly sexy. Either way, she’s got my 2012 vote! (It would be worth it if only to have the handsomest first man EVER! Plus, Angelina could adopt the entire United Nations and just tell them what to do!)

(Just in case you were wondering, there is also a procedure called inverse Palinization. CLICK HERE for an example of that.)

Here are more of the Palinized Angelina Jolie from the Salt premiere in Paris on August 17, 2010.

Before you angry Jolie fans start commenting obscenities, please know that I realize Angelina Jolie doesn’t look like Sarah Palin and that although Palin does pretty well on the MILFometer, Angelina is in an entirely different stratosphere. As far as the Sarah Palin fans who want to start with their obscenity-laden comments, there’s nothing much I can do about that.