Actor Wesley Snipes has officially surrendered to authorities today to begin a 3-year sentence for tax evasion.  Snipes has been in a nearly 2-year battle to have his sentence thrown out but has been unsuccessful.

Snipes’ new digs are a far cry from the Hollywood lifestyle he’s used to.  His new home at Federal Correctional Institution McKean, near Bradford in Pennsylvania features a 70sf cell that he will be sharing with other undisclosed inmates during his time in the slammer.  While Snipes will be hanging at the minimum security barracks-style part of the McKean compound among other “white-collar” criminals there is also a medium security center on grounds that has had its share of gang violence and riots.

Here is a great shot from McKean of what Wesley Snipes will be walking into after being processed for incarceration today: 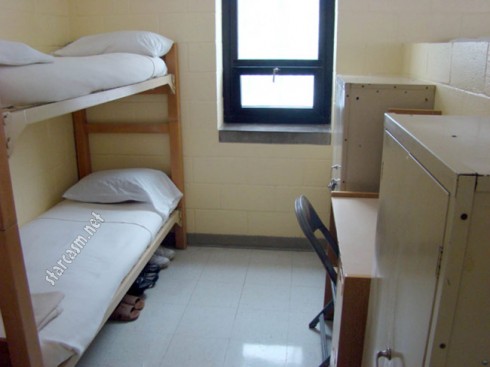 Not too bad I guess, but it ain’t too roomy either.  Snipes will be sharing public showers and restrooms with the other criminals housed in the minimum security compound.

Good luck to Wesley as he serves his time.  As of this post his lawyer is still looking to find a way to have the decision overturned.  Until then it’s time for the Blade star to start livin’ lean at McKean.

Did Justin Bieber impregnate a fan the first time he had sex?