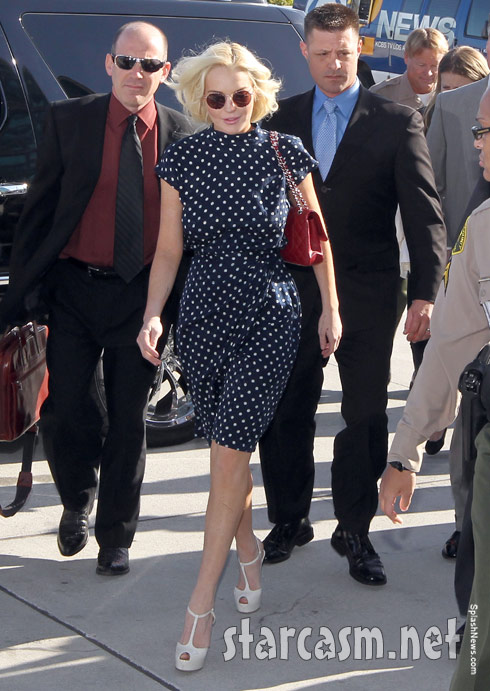 Troubled actress Lindsay Lohan returned to court today after Judge Stephanie Sautner ripped her a new one during her hearing back on Oct 19.

Lindsay conceded today to having violated her probation while her attorney Shawn Holley argued for LiLo to receive as little jail time as possible. Enough of the formalities. So how much time will the future Playboy poser be spending behind bars this time!?! She was sentenced to…….

30 days. She is to surrender by Nov. 9. She also received another 270 days that were stayed and will remain permanently that way (meaning she will not have to do that time) if she meets all the new terms of her probation.

As is standard practice for someone guilty of this level crime in L.A. County, Lohan will only spend 20% of this time behind bars. So in total Lindsay will be incarcerated for 6 days. She will receive her own jail cell, avoiding general population out of concern for her safety. All of Lindsay’s probation time is to be served at the morgue and the judge stated, rather awkwardly, that the morgue had issues with her tweeting. The judge also told the morgue to shut their yaps about Lindsay.

Celeb Justice Update: Covering Lindsay Lohan alone has made me realize that our justice system needs a serious enema. Back when LiLo got ripped by Judge Stephanie the L.A. County Sheriff publicly announced that there was room in his jail for Lindsay if the judge sentenced her. Well that isn’t the case actually. Here’s the direct statement from TMZ:

“…if someone receives a misdemeanor sentence of 90 days or less, they are routinely processed in and then released.  As one of the officials put it, “She’ll be out without even having to change her clothes.”