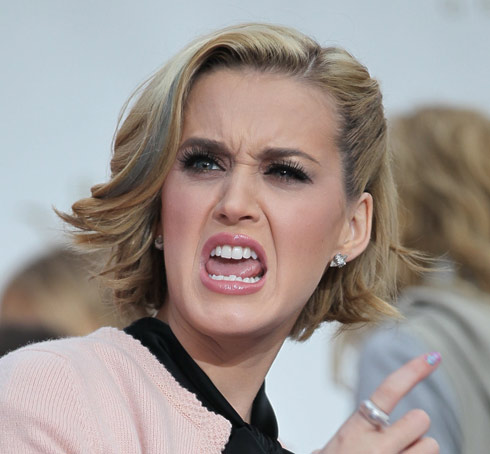 Katy Perry has been rather quiet since it was announced last month that her husband Russell Brand had filed for divorce. On January 7 she tweeted that despite what we may hear, see, or read from her family, on web sites, or in magazines – Katy is the only person who speaks for Katy. Then, on January 9, she announced she would not be attending the People’s Choice Awards.

Everyone assumed that Katy was missing the Awards show, where she took home 5 awards in absentia, because of the difficulties of dealing with her divorce. But, the above photo…

UPDATE: It looks like the image was scooped up by a photo image site so we can’t have it here anymore (grrrrrr). As I type, the below Tumblr link still has the photo in question.

… up this evening on Tumblr with this interesting description from a devout “Katy Cat:”

So, the reason Katy Perry wasn’t at the PCAs is because she was recording a commercial for Adidas. My best friend’s uncle is one of the filmers for the commercial, and told me. I wanted to get it out to the Katy Cats before the media does. She dyed her hair blue and wore a wig to her divorce hearing to hide it from fans so she can surprise us!

EDIT: According to other Katy Cats, the picture released on Tumblr of her going to her divorce hearing is old? Unsure of this. But this picture is from TODAY. So thats all that matters!

So did Katy Perry miss out on the People’s Choice Awards so she could film an Adidas commercial?!? That sure doesn’t sound like her. Katy is so appreciative of her many fans, and she’s usually the first to show up at any awards show in which the fans themselves decide who wins. Hmmm…

Meanwhile, Katy did take to Twitter tonight to thank all her fans that voted for her and helped her win favorite female artist, tour headliner, song of the year for “E.T.” with Kanye West, music video for “Last Friday Night” and TV guest star for How I Met Your Mother:

In other Katy Perry news, her parents are already moving on from their future former son-in-law and according to OK! are hoping Katy will consider dating Denver Broncos quarterback sensation (and openly devout Christian) Tim Tebow!

“[Katy’s] mentioned on more than one occasion how much she likes Tim,” a source tells the magazine. “Katy’s mom firmly believes the best cure for heartache is to quickly fall in love again … In her mind, Tebow is the perfect guy for her daughter. He’s handsome, charming, intelligent and above all, a good Christian.”

I have to confess watching Tim Tebow getting sprayed on stage with Katy Perry’s breast whipped cream sure would be awesome!

UPDATE – It was also just announced that Katy Perry will be performing during Super Bowl week at the DirecTV Super Saturday Night at Victory Field in Indianapolis. The event will be hosted by Indianapolis Colts quarterback Peyton Manning and Mark Cuban’s HDNet.