Palicki is a very attractive woman, but that costume looks a little dollar storish, and not in an enjoyable, campy kind of way either. I guess I’m OK with the Iron Man top, but Wonder Woman just doesn’t wear pants – it’s as simple as that. Maybe Adrianna Palicki is a little thigh shy, but that could easily be remedied with some tights or something. Oh, and Wonder Woman’s booty HAS to have stars on it! Give her a hat, let her have short hair, make her blond… just give me stars on the booty!

Here are a couple samples of Wonder Woman like I’m talking about: 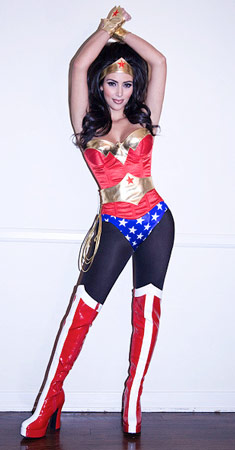 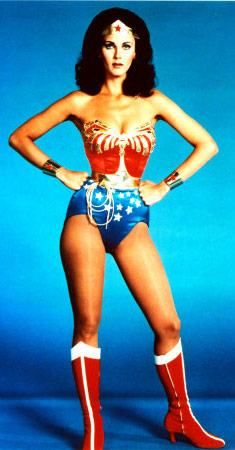 Obviously the one on the left is the iconic Lynda Carter who single-handedly sped up the puberty process for millions of teenage boys as her run as the original Princess Diana in the ’70s television version of Wonder Woman. On the right is Kim Kardashian from a couple Halloweens ago demonstrating my point that tights can work and booty stars are necessary.

For the Adrianne Palicki incarnation of Wonder Woman Tracie Thomas will play Diana Prince’s assistant Etta, and Pedro Pascal is in line to play WW’s laison to the police department. The show’s villain will be played by Elizabeth Hurley and the CEO of Diana’s company, Themyscira Industries will be played by Cary Elwes. The show is currently filming the pilot episode for NBC.