After years of seeming like a care-free heiress who liked to do nothing but party, make sex tapes, and flash her business, Paris Hilton has come out of the closet as a working girl. 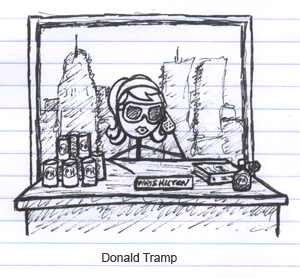 She recently revealed to Reuters that the biggest misconception about her is “The one that ‘she doesn’t work.’ I am literally running a huge corporation,” said Paris. “I have my clothing lines, my champagne, my watches, shoes and purses and dogs clothes – every sort of product you can imagine.

“I am doing movies. I am doing my record right now, producing, starring in a TV show. So it is a 24 hour, seven day-a-week job. I work all the time, so I laugh when I hear people say that.”

It’s not clear at what point being Paris became a job for the jet-setting princess, but there is no doubt that being herself is a time-consuming and stressful occupation. Presenting the public with a 24/7 trashy s**t-a-thon may have been easy five years ago, but now that every slip of the nip, “accidental” crotch shot, misdemeanor arrest, and drunken night club appearance just means a larger paycheck at the end of the week, Paris has to budget her time efficiently to maximize the value of the franchise.

Not many people have what it takes to be responsible for generating so many horrible hours of reality television and sub-generic pop tunes, an endless list of culture-devaluing products like champagne-in-a-can and Chihuahua clothing, multiple auto-biographies, three different perfumes (Paris Hilton, Heiress, and Just Me) to give you that Paris odor, and expensive sl**ty clothing for young, impressionable daughters to wish they could afford. All of this while still maintaining the trampy nightlife socialite identity, which involves an incomprehensible amount of drinking, traveling, scheduling, keeping her hair perfectly Paris, deciding which panties not to wear, jail time, and all the other activities that would fill the schedules of your average celebutant.

So let’s cut Ms. Hilton some slack. After all, her grandfather Hilton has basically cut her out of the hotel fortune, so she is just doing what it takes to get by. She’s an independent woman making her own way – a fine role model for all the extremely wealthy tramps out there not doing it for the money.