In the January issue of O magazine, Oprah Winfrey talks about her recent weight gain and the frustration associated with “falling off the wagon:”

“I’m embarrassed … I can’t believe that after all these years, all the things I know how to do, I’m still talking about my weight. I look at my thinner self and think, ‘How did I let this happen again?’ ”

A source not close to Oprah, and prone to making things up for humor’s sake, is telling starcasm that Oprah was planning on resurrecting her acting career in an upcoming Hollywood epic about the recent wildfires in California that almost engulfed her Montecito mansion. According to the source, this role is now in jeopardy because of her weight issues.

Here’s an exclusive peek at the proposed movie poster, which clearly features a trimmer, easier to tote Oprah: 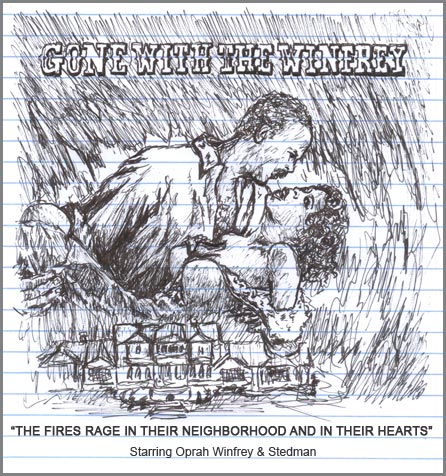 Stedman is reportedly still “lookin’ goooooood,” so his role is not in jeopardy.