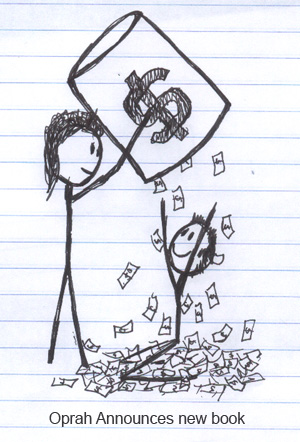 Wroblewski will join the growing ranks of Oprah-ordained bestselling authors previously unknown to most Americans, including James Frey, Leo Tolstoy, and William Faulkner. Frey stirred up a lot of controversy when his autobiography “A Million Little Pieces” turned out to be exaggerated a bit. Tolstoy and Faulkner didn’t stir up much controversy, they just wrote great books.

“Edgar Sawtelle” is about a mute boy and his dog on a Wisconsin farm in the 1970s. Despite the description, there is a chance it may not be the most boring book ever written. Though you may never run across respect or optimism on the pages of starcasm, we do reserve the right to occasionally offer the benefit of the doubt, and that’s exactly what we will extend to anyone that could get 100 billion people to read “The Sound and the Fury” of their own volition.

Oprah, you officially have the benefit of our doubts. Now, is there any chance you could name our site as your next choice for the book club?