Jimmy Fallon‘s run as Conan O’Brien‘s replacement on Late Night gets an early start this week when the first of a series of five-minute webisodes will “air” on NBC.com. (They will start Monday night/Tuesday morning at 12:45 a.m. with the televised premiere of the show scheduled for March 2.) These shorts aren’t in a talk show format, but are instead video blogs that allow Fallon to get audiences familiar with him as a comic individual. We’re not sure that’s possible.

Jimmy’s comic genius lies in his ability to not be able to stay in character when he finds something funny. He’s basically an affable human laugh track that you can put right into a skit, a-la Harvey Korman. BUT, this talent relies on having a “serious” and secondary fictional role to fall out of. So how in the world does he plan to be funny all by himself, much less as a talk show host? 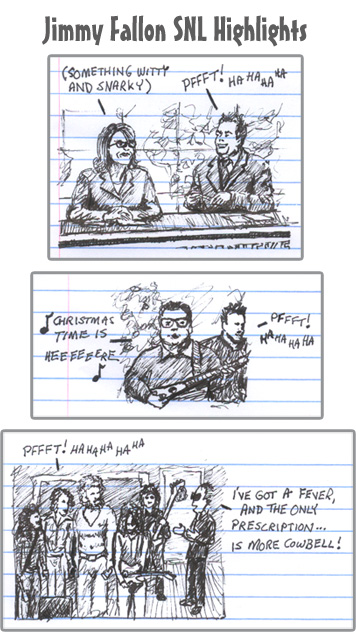 Here’s our suggestion to make the show work:

Horatio Sanz should “co-host” the show in the tradition of Ed McMahon and Andy Richter, but as a different ridiculous character every night. (Saddam Hussein, drunk Mexican, Sarah Palin) He would interject during the interviews, do things in the background, make sounds – all geared towards trying to get Jimmy to “crack.”

…You know, I started this just to be sarcastic, but I’m thinking now that it’s actually a pretty good idea! Every night there would be the excited anticipation of Jimmy’s introduction of Horatio, which would be the moment his character for the night would be revealed. Crowd favorites would naturally develop, which could then become recurring characters. He could play inanimate objects like a trash can or big shoe. The possibilities are endless! Wow! I’m excited about Late Night with Jimmy Fallon now! I hope someone at NBC reads this in time!

Ummm. OK. So much for sarcasm. I’m not really sure what to d-PFFFFT HAHAHA!!!!!