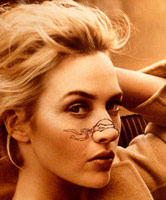 Lindsay Lohan lied about why she was late – Amy Grindhouse

Ellen Barkin curses her way on to Twitter – Jezebel

Zombie Boy is ready for that job interview now – dlisted

The 10 sexiest Halloween costumes of the year – Betty Confidential

Get the look: How stars where ankle boots – The Fashion Spot

Gallery of men who are “old guy hot” – The Frisky

Amber Rose covers Inked Magazine – Straight from the A

Matt Damon and John Krasinski team up for new film – Have U Heard?