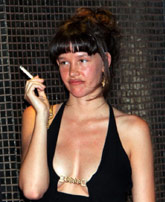 Was Nick Carter left out of sister’s funeral? – Amy Grindhouse

Karl Lagerfeld say Adele is a little too fat – Jezebel

Rihanna was out partying with Chris Brown again – The Superficial

Former intern opens up about alleged affair with JFK – The Frisky

Katherine Schwarzenegger made her big debut as a special correspondent for Entertainment Tonight – Have U Heard?