Heather Locklear made her first televised appearance since her September DUI arrest, sitting with Jay Leno on the Tonight Show Wednesday night. During the interview Heather answered questions about her bad year, her ex and current boyfriends and her upcoming movie on Lifetime called “Flirting with 40.” There was even a moment when she laughed until she cried after Jay showed a vintage TJ Hooker clip of a Farrah-Fawcett-headed Locklear scantily clad and dancing like Elaine Benes. Funny stuff. 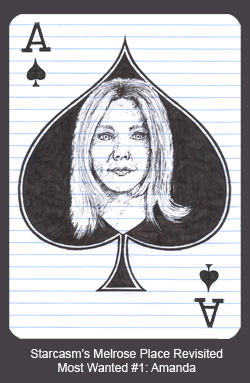 What Heather DIDN’T talk about is whether or not she will be a part of the CW revisioned Melrose Place. The topic never even came up! We’re gonna see that as a positive sign! It wouldn’t have distracted from or damaged the promotion of her current project in any way to say that she definitely WASN’T going to be on the show (like Grant Show has done), so why not even bring it up unless there is a slight possibility it might happen? An admission of even the slightest possibility would steamroll any lifetime movie as far as publicity goes! We are officially changing our odds of Heather having a part in the new series from 167:1 to 98:1! (Yes, we are irrationally high spirited. We see the glass as 2% full!) And we will reveal another card in the Starcasm Melrose Place Revisited Most Wanted list.

It’s no surprise that numero uno on the list, our ace of spades, is Heather’s character Amanda Woodward. Here’s what we had to say in our Melrose Revisited announcement post about the blonde but rooty, advertising astutey and full of attitudey beauty with the skinny booty:

“This was 100% Amanda’s show, and if you have any doubts about that, just watch the lame-o misdemeanor-ridden episodes from before her arrival. And Heather Locklear seems to be in fine Melrose shape, given her recent DUI brought on by a phone call to police from an aggressive paparazzo not willing to wait for the news to come to her. (Straight out of a Melrose script!) So, Heather, quit denying yourself and us your true calling, stop it with the sitcom appearances and demeaning L’Oreal commercials! ***And Lifetime Movies!*** Get back to your roots (and split ends)! Once again become that intimidating icy bee-yotch that gay men want to be and straight men want to be hurt by. Come back home, even if it is on The CW!”

So we now have the king of clubs (Jake) and the ace of spades (Amanda). Stay tuned for more!