Entertainment Weekly is confirming the inevitable: The CW is working on bringing back Melrose Place! The sinking ship of a network has been taking on more and more water of late, and the air bubble of hype and moderate success of Beverly Hills 90210’s return has them hopeful that cashing in on a revamped Melrose Place might provide more buoyancy. 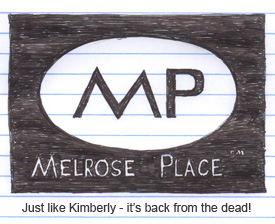 EW reports that the creator of both shows, Darren Star, has already said it “would be a fun thing to do.” But who cares about a shallow hour-long drama featuring immature, sexy, backstabbing, predictable characters acting out numerous felonies on a weekly basis? Does anyone want to know if Sydney isn’t really dead or if Kimberly might blow up the apartment building again after kidnapping Jo’s baby she had with her drug dealing boyfriend she killed in self-defense on a boat paid for in part by Jake and Amanda even though Jake was suspected of burning down his own motorcycle shop that Jo paid for when they were dating the first time before Jake was with Amanda? YES YES YES!!! Lord have mercy, but YES!!

Realizing that The CW usually can’t even afford members of the actors’ guild for their shows, we sure hope they’re able to muster enough to bring back a couple of the “juicy” original characters. Stupid Matt and Kimberly are on Desperate Housewives, so we can forget about them. Jake is on Swingtown, and will remain there until the novelty of seeing people dressed in ’70s clothes and sleeping around wears off, which will probably happen in the next few weeks, but not soon enough to prevent another season. Removing those three from the list of possibilities, here are Starcasm’s rankings for feasible characters The CW could afford to bring back:

1. Amanda. This was 100% Amanda’s show, and if you have any doubts about that, just watch the lame-o misdemeanor-ridden episodes from before her arrival. And Heather Locklear seems to be in fine Melrose shape, given her recent DUI brought on by a phone call to police from an aggressive paparazzo not willing to wait for the news to come to her. (Straight out of a Melrose script!) So, Heather, quit denying yourself and us your true calling, stop it with the sitcom appearances and demeaning L’Oreal commercials! Get back to your roots (and split ends)! Once again become that intimidating icy bee-yotch that gay men want to be and straight men want to be hurt by. Come back home, even if it is on The CW!

(If it’s just a money issue, perhaps the government might be willing to chip in to stimulate the economy. Certainly a successful Melrose Place is a sign of a good economy, right? If you would like to donate to the Bring Heather Locklear Back to Melrose Place Fund, please click on the gratuitously huge “donations via Paypal” button at the top right corner of this page. We will make sure the generous contributions will get into the right hands.)

2. Billy. If Andrew Shue is no longer alive, we would settle for Butters from South Park. Same thing, only Billy was post-puberty.

3. Allison. Courtney Thorne-Smith’s breathy, breasty and bashful Allison started out as the central character in the series – making MP a poor man’s “Tales of the City” initially. But, this innocent small town blonde from the midwest eventually caught on and was sleeping with stalkers, becoming an alcoholic, and marrying men soon to die suspiciously, just like a good Melroser.

5. Sydney. (Laura Leighton) Oh man! The worst of the worst! Absolutely NO redeeming qualities! Beautifully ugly soul! Laura Leighton?!? Even The CW could afford her! (We did a little research and found out Laura is now married to Doug Savant, the guy who played Matt! It seems she’s in fine Melrose shape as well! Let’s hope Laura isn’t as greedy in real life and doesn’t play the “my husband’s on Desperate Housewives so I should get more that $10 an episode” card).

We’re not big fans of Jane, Peter, or Jo and would have no problem replacing them with younger legs and six packs.

Oh wait – I was gonna make fun of Melrose. What happened?