Following in the bootsteps of fellow California celesbians Ellen and Portia, Melissa Etheridge and Tammy Lynn Michaels will legally tie the knot sometime before Proposition 8 (which would disallow the issuance of marriage licenses to same-sex couples) gets voted on in November. 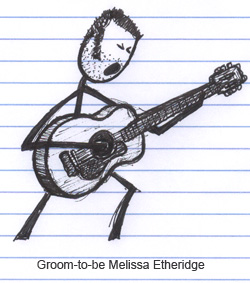 The couple married in Malibu in 2003, but just like Tammy Lynn by herself, that ceremony isn’t recognized by the state of California. There’s been no date set for the event, but for music fans everywhere the wedding can’t happen soon enough. It is hoped that officially sealing the deal will end Melissa Etheridge’s hiatus from making some of the greatest rock and roll music of all time, a hiatus that has lasted since her birth in 1961.

No one knows if the union will affect Tammy Lynn’s much shorter hiatus from acting poorly in bad television shows.

Some interesting facts about the couple:

Melissa’s two children from a previous relationship were fathered by singer/songwriter David Crosby. Etheridge chose her overweight, balding, former drug-using friend as a sperm donor, confirming the widespread rumor that she has only one friend with sperm.

Etheridge’s partner Julie Cypher actually gave birth to both children, but split from Melissa after reconsidering her sexuality. (We assume she now prefers women instead)

Nothing else is known about Tammy Lynn Michaels.

Are Melissa and Tammy Etheridge calling it quits?