Oh man – it’s rarely a good thing when a wealthy man’s trophy wife is very serious about the talent portion of her “pageant of life” success. Mel Gibson’s piano-playing baby momma Oksana Grigorieva is no exception, as evidenced by the release of her new single “Say My Name” this week. (Download the song for free at oksana.fm or watch the video below) 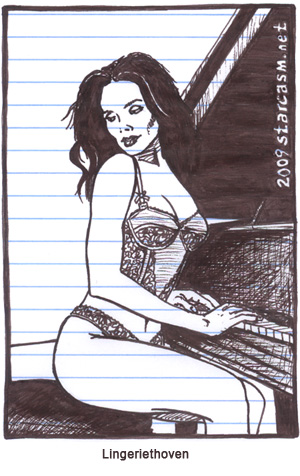 Oksana had this to say about her new song: “It is the first and one of the simplest songs on the album, but also one of the most intimate. It is naked, intimate, raw emotion, little more than piano and voice as if it is a cry from the soul.”

(After hearing it, my soul is certainly crying) For someone upset about allowing herself to be shot in lingerie as part of promoting her music career, Oksana’s choice of words seems a little strange. She actually used these five words in succession: “intimate it is naked intimate.”

I wondered how Mel could bear listening to her songs over and over, but then I ran across this video with the new single playing and I remembered that he’s a guy: 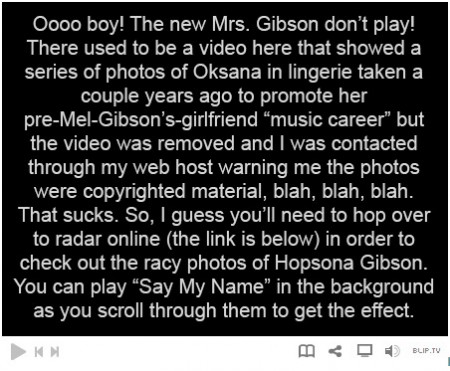 I can knock the talent portion of Oksana’s repertoire all day, but there is no doubting her qualifications in the swimsuit competition! Perhaps that and being with Mel Gibson are all she needs for a successful music career, but it wouldn’t hurt to change her name to something a little more marketable than Oksana Grigorieva. Here are a few suggestions I came up with for the piano-playing songstress:

And here’s a video of a chick just as hot, but with waaaay more talent. Why couldn’t Mel have hooked up with this yummy sex kitten instead?

****UPDATE 6/22/09 – The official Oksana video has been released. I kinda like it more with color and lingerie.

VIDEO Is ‘The Mad Drummer’ Steve Moore truly In The Wrong Gig?

VIDEO NFL linebacker Junior Seau gets trampled by a bull!